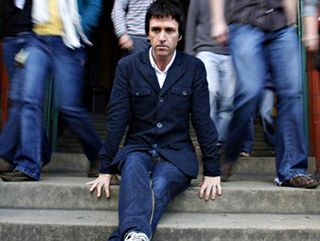 The wiry 45-year-old man standing at the lectern doesn't look much like a professor, but that's what he is.

In a rare honour bestowed on a rock guitarist, Manchester's Johnny Marr has been installed as a Visiting Professor to the University Of Salford's school of Media, Music And Performance. And 4 November saw 'Professor' Marr delivering his inaugural lecture.

Marr remembers the last time he was in Salford University's Maxwell Hall. It was a Smiths gig in 1986, where the floor bounced so hard the PA had to be held down with ropes to stop the speakers collapsing into the crowd.

The ceiling of the ground floor room below was so badly damaged, gigs were never held in Maxwell Hall again. "I did that damage with my guitar, thank you," Marr grins.

"Build your own ark"

Marr's not here to reminisce about The Smiths, however, though he does a fair bit of that too. He's here to deliver an address - personal and impassioned, rather than academic - called Always On The Outside: Mavericks, Innovators And Building Your Own Ark. Marr's basic premise is how 'outsiders' are at the heart of successful art, and how following music industry convention will result in a musician "castrating yourself".

"People out of necessity, rejection or frustration, with talent and vision built their own ark and sailed it alongside the music industry."

"In The Smiths, I wrote music for the other three because they were my best friends, not industry people, and that's important. Jay-Z made his first album to impress his friends. But rule one - make sure you've got friends with good taste."

One of the listening students, Matt Gordon, 21, sums up why a full-house of a thousand people have come to listen to Marr's outspoken opinions.

"He's a great guitarist, first and foremost. And he tends to do what you don't expect, and I think that keeps him interesting. I've not liked everything he's done, but I like the way he's done it - if you know what I mean?"

There was perhaps a sense that Marr thinks everything was more inventive and 'edgy' in his '80s indie heyday - he may even have a point - but today's lecture was only the start.

In coming weeks, Marr starts guitar, recording and writing masterclasses, which for any Salford student will surely be a treat.

"It's exciting to think that someone I come across might become a producer or start a record label," said Marr. "Salford University has fantastic resources and great people."

Marr will be 'professing' at the university for the next five years, while continuing his recording and live career with Modest Mouse and The Cribs.