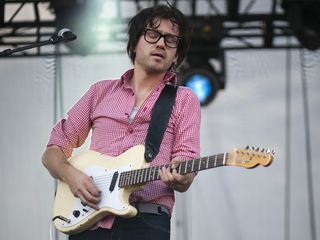 The French band Phoenix have hit the big time - and to think, it's only taken them 18 years, four albums and a zippy little pop song about 19th century composer Franz Liszt to do it.

Branco - that's what he goes by, and you have to admit, it's a seriously cool nickname - is an intriguing, post-modern guitar hero, who serves up tasty lines with the same panache as Eric Ripert puts into a chocolate souffle.

Whether Phoenix return to France with Grammys in hand or not, they can lay claim to at least one distinction: they're quite possibly the most remixed band around, so much so that Wolfgang Amadeus Phoenix has been issued as a full-length remix album, with Passion Pit, Devendra Banhart, Animal Collective and Friendly Fires, among others, twisting the tracks every which way, almost to the point of unrecognizability.

"It's a great honor when somebody takes your song and does something different with it," Branco says. "That's what music is all about, to constantly change what somebody else has done."

MusicRadar spoke with Branco recently to talk about Phoenix's dizzying success, his love of Fender Bullets and why he hates practicing. Hear it here or scroll down to read it...

Not a lot of French acts have broken big internationally. Why do you think you guys are doing so well?

"For us, it would be very sad to understand what's happening. We prefer for it to be a bit mysterious. But we do like the idea of doing things that haven't been done before. Having a life outside of France and traveling around the world was always very appealing to us. You know why it's happening; I don't."

Well, I would say it's the music.

Before we get into the new record, I have to ask you about the Beach Boys-type act called Darlin' you used to play with.

"Ahhh, yeah. The name came from a Beach Boys song. We did Beach Boys covers. It was my first band, a punk rock band with a love of the Beach Boys. It was with the two guys from Daft Punk. But that was a long time ago - we were children."

Is that the kind of music you grew up with? Who were your guitar influences?

"Guitar-wise, a lot of The Velvet Underground. We were always fans of guitarists who were very humble, played the right things and did not play solos."

Why do you lean towards the 'anti-solo' stance? You remind me a lot of Johnny Marr in that regard.

[laughs] "I don't know. I always considered technical musicianship as something you should be ashamed of - I don't know why. [laughs] But it's always been like that. My heroes, I couldn't imagine them practicing. Like Bob Dylan, you know? Bob Dylan's a very, very good guitar player, but it's like he's trying to hide it. I always loved this attitude. When you're very good…it's like being an athlete - and I always hated sports!" [laughs]

So it's the training, the day-to-day repetition of practicing that you shun from?

"Yeah, for sure. You shouldn't think like that. I'm not proud of myself, but it's just the way I associated things when I was a kid. I thought it was too 'glam rock' to practice. The problem is that now I'm a pretty bad guitar player."

[laughs] Well, I wouldn't say that. You certainly have a style. I want to ask you about guitars - you seem to favor a Fender Bullet.

"Yeah, it's a guitar that is very cheap. We purchased it a long time ago in London as a spare because we needed one guitar in case there was a problem. I fell in love with it. That's the thing: we love equipment that is either very cheap or very expensive.

"I like its flaws. It's a complicated relationship with a guitar. I love the Bullet, for sure. They did a more deluxe model, but it's not the same; it's not as good."

What kind of effects do you use, particularly on the song Love Like A Sunset? There are some amazing guitar sounds on that.

"We don't use a lot of effects. Basically, we have one pedal that's done by our friend and guitar tech. It's a small distortion pedal, based on a Tube Screamer, but it's custom. Basically, that's it."

"We use Fender Twins. In the studio, we have a Vox amplifier. But if you want to know the real secret, it's more in the preamps we use. You use a very cheap mic and a very good preamp, and that's the secret. We have very old equipment - it instantly sounds like a record, which is what we're looking for."

Was Love Like A Sunset written out in parts, or is it the result of a jam?

"I wouldn't say it's a jam, but it's more of a very cerebral jam. It was made out of a lot of ideas we had. It was kind of hard because it's an instrumental song. It's hard when you don't have the limits of a pop song. The rules, you know, the adventure of a pop song - you have to find new rules to make it stand and make it solid. We thought it would be easy, but it wasn't. It's a jam, but it was like jamming with a mathematical formula."

That song and all the others from Wolfgang Amadeus Phoenix have been remixed by acts like Passion Pit, Chairlift, Animal Collective, so many others…Where did the idea come from to remix the entire record?

"We put a lot of separate tracks of the songs on our website for people to do their stuff. We love the idea of, once the album is finished, it kind of belongs to everybody. After a few months, we had a lot of remixes coming that were really good, so we picked some favorites, and we decided to add some cool artists to do one or two songs - we wanted to make it a bit official."

Some of the remixes couldn't be more different from the originals. Was it jarring at first to hear them?

"We love when it's very different, for sure. We love when you can hear that it's more a song by Passion Pit or Animal Collective than of Phoenix. We feel very privileged. We're very happy."