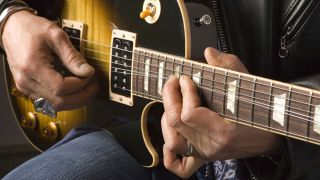 Guitar skills: let's get one thing straight – you don't need to know a lot of scales to be a good guitarist. In fact, if you've been playing for under a year you could quite safely get away with only knowing one scale: the minor pentatonic scale.

The only scale you'll need... for now

Tons of great guitar players - including Angus Young, Eric Clapton and Zakk Wylde - use the pentatonic scale as the main ingredient of their solos. In the early stages of your guitar playing career, you shouldn't feel under pressure to learn lots of scales.

It won't make you a better player - in fact, it may actually make you a worse player because your solos (yes, you will be able to play some soon!) could end up as memory tests rather than the concise musical statements they should be.

It's better to be proficient with the scale that is used in 90 per cent of solos than fumbling around on the less ones just to show off.

It may have a scary name, but the pentatonic scale is really easy to play on the guitar. It has just five notes ('penta' comes from the Greek word for five), but as you'll see in the first example all of the notes are played at least twice (this is why you actually play 12 notes in the pattern).

Tip: Use alternate picking and try to play the scale as evenly as possible - don't go too fast.

As well as showing you the pentatonic scale, we've also given you a lick that makes use of it. Both of these examples should be played with an alternate picking technique.

Tip: This is a simple phrase played twice. Use alternate picking, and once you've practised it a few times try and play with the backing track (below). Don't be put off if it takes you a few goes to get it right.