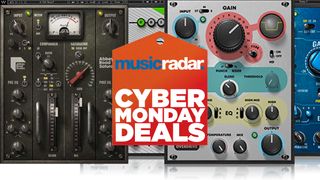 First up is the new Abbey Road Saturation plugin which is modelled directly from saturation chains at Abbey Road Studios. The plugin offers two distortion flavours: the crunchy tube REDD sound, and the rounded solid-state TG12345 tone, with the input, gain and output stages of both consoles calibrated by Abbey Road’s engineers.

Next up is the MDMX Distortion Modules plugin, which gives you three stompbox flavours including the classic Screamer, Fuzz and Overdrive tone-shapers.

The plugin features on-board dynamics, EQ and tone controls; “Temperature” controls to tweak overall color and warmth; Mix controls to blend the clean and distorted signals; M/S processing to distort just the mids or sides of the signal.

Both plugins have been instantly reduced to $49.99 each, but you'd be crazy to buy them separately when you can get both for $49.99!

The madness doesn't end there either. Buying both plugins in that deal instantly entitles you to claim a third plugin, free. If that's baked your noodle as much as it has ours, check out the Terms and Conditions for more info.