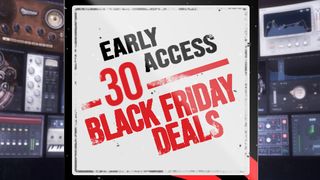 Waves is offering you the chance to access its lowest plugins prices of the year ahead of Black Friday 2019, with over 30 early deals to boost your mixes and productions.

There are absolutely tons of Black Friday plugin deals across the entire Waves catalogue with some effects coming in as little as $29.99 each. Plus, there are some big savings to be had on the much-coveted Waves bundles too.

On first glance, our pick of the bunch has to be the Silver collection which is now a jaw-dropping $49.99, down from $599. Yes, you read that right, that’s over a 500 bucks saving!

It doesn’t end there as the software giant is also offering multibuy discounts, where you can save an extra 25% off the 2nd plugin purchased, 30% off the 3rd-5th plugins and 35% of the 6th plugin and beyond.

The Black Friday Waves VIP early deals now can be found on the Waves website now.

Check out some of the highlights

Waves Silver plugin bundle: save over $500, now just $49.99
Get your hands on 16 professional award-winning plugins for music production, mixing and mastering all for an insanely low price of $49.99.View Deal

Waves Abbey Road TG Mastering Chain: was $199, now $29.99
Now is your chance to get hold of five independent mixing and mastering modules, modelled after the EMI TG12410 Transfer Console used in all Abbey Road's mastering suites since the early '70s to this day.View Deal

Waves REDD: now $29.99 down from $249
Another Abbey Road Studio icon can be yours for just a mere snip of its original price. Based on the legendary REDD.17, REDD.37 and REDD.51 consoles, Waves REDD plugin delivers the classic British sound of the 1960s.View Deal

Waves API 2500: was $299, now just $29.99
Modelled on API's vintage compressor, the 2500 boasts a wide range of incredibly musical parameters which have made it a favourite of engineers the world over.View Deal