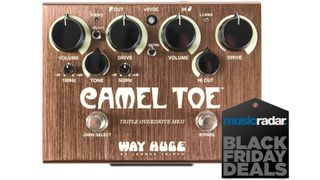 It may have a cheeky name, but the Way Huge's Camel Toe MKII Triple Overdrive is very serious about tone. And it's just become an absolute bargain in Sweetwater's Black Friday sale where it's now just $119.99, down from $279.99.

That's over 57% off a pedal that is already giving you two great overdrives in one!

The Camel Toe is the combination of two popular Way Huge effects units – the Green Rhino Overdrive and their Red Llama Overdrive. While the Green Rhino circuit brings the grit and sustain, the Red Llama side pushes your amp while offering a wide range of gain on tap. offers a wide gain range.

The tonehounds at Way Huge offer you more than enough controls to shape the Camel Toe's tones to suit any guitar you pair it with.

The latest MKII really is a gain-stacking paradise; players get all the controls from MKIV of the Green Rhino, while the Red Llama section adds a new hi-cut tone control in addition to the usual volume and drive.

A drive selector footswitch toggles between the circuits, and flicking the series switch combines the two in a whole different manner; the Red Llama can be switched on or off via a drive selector switch, while the Green Rhino is always on.

Frankly, this Black Friday guitar deal is a steal at just $120!  Catch this Camel while you can below.

Save $160 on Way Huge's Camel Toe MKII Triple Overdrive
Supercharge your overdrive tones with Way Huge's flagship pedal at under half price in the epic Sweetwater Black Friday sale.View Deal