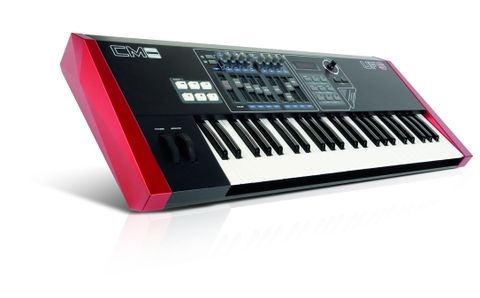 A heavy-duty controller with great keys. However, it lacks user presets and there's no software editor.

CME's MIDI keyboards are designed to be hardy enough to withstand the rigours of life on the road yet also provide enough functionality to merit inclusion in a home studio setup.

Each keyboard offers the same MIDI control features but has a different number of keys. We're looking at the four-octave UF5, the smallest model in the range.

Exhibiting a curious combination of modern and retro styling, the angular, contoured chassis is made entirely from metal. This makes it much heavier than its similar-sized contemporaries, but also more robust.

The usual collection of connections lurks around the back of the UF5. There's a USB port (from which the unit can take its power), a DC in (a power supply comes included), a MIDI Out port and sustain and volume pedal inputs.

There's also a blanking panel that can be removed should you wish to install the optional UF400e 24-bit/192kHz audio interface (£170).

The UF5's top surface is peppered with controllers. There are buttons, a transport panel, nine rotary controls and nine sliders.

Each of these controls has at least one preset function and this is printed next to it on the chassis.

The rotary controls are tactile, centre-detented offerings that operate smoothly. The only problem is that they're positioned too close together.

The sliders' design is less orthodox - these are all set flush with the controller's surface and therefore it doesn't matter that they're packed tightly together.

The functions of the sliders and rotaries can be set using the buttons next to them. The sliders can be assigned to control volume levels for channels 1-8 and 9-16, and controller values of your choice, effectively giving you 24 sliders worth of control.

Each rotary can operate either a designated function - such as pan - or a user-assigned parameter.

Several other momentary buttons give you direct access to a range of functions. To the left of the controller is a collection of chunky Transport controls. These click satisfyingly when you press them and help you to cut down on your mouse time, which is always a good thing.

The semi-weighted, synth-action keys are heavier than you'll find on any other controller in this price range and feel great in use. Four velocity curves are provided and aftertouch is supported, too.

The UF5 is very solidly built and has some inventive performance features. We like the idea of multi-use faders and rotaries, and the transport controls are very useful.

The lack of any easy editing software might put some people off, but the UF5 is perfect for those who want a keyboard for the stage as well as the studio.