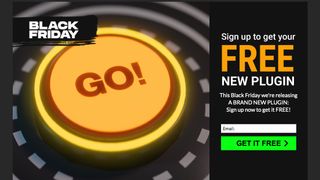 Waves has always gone big with its Black Friday plugin deals in the lead up to the main event, dropping huge price cuts on a huge range of software. In fact, right now you can get up to 91% off their biggest plugins, ranging from compressors and delays to EQs and synths.

This year Black Friday will take place on Friday 29 November and it looks like Waves is set to keep up its annual Black Friday tradition by offering up a free plugin to users in exchange for an email signup. While we're still waiting on details, a Facebook teaser video has already appeared promising a 'free new (abnormal) Waves plugin'.

There's not much to go on in the video, just a shadowy interface and some bombastic club music. It all suggest we'll be getting something a little more 'in-your-face' than last year's free Sibilance de-esser freebie though. Maybe some kind of pumping compressor? A bass enhancer? An exciter? We'll have to wait until Black Friday to find out.

Sign up to get your FREE plugin from Waves this Black Friday
Who doesn't love free stuff? Especially when it enables you to make more music. Sign up now to receive Waves' brand new plugin on Black Friday.

Waves API 2500: was $299, now just $29.99
Modelled on API's vintage compressor, the 2500 boasts a wide range of incredibly musical parameters which have made it a favourite of engineers the world over.View Deal

Waves Silver plugin bundle: save over $500, now just $49.99
Get your hands on 16 professional award-winning plugins for music production, mixing and mastering all for an insanely low price of $49.99.View Deal

Waves Abbey Road TG Mastering Chain: was $199, now $29.99
Now is your chance to get hold of five independent mixing and mastering modules, modelled after the EMI TG12410 Transfer Console used in all Abbey Road's mastering suites since the early '70s to this day.View Deal

PuigTecEQs: was $299, now $29.99
A bundle of the MEQ-5 and Puigtec EQP-1A EQ, which is a replication of the original hand-crafted unit owned by iconic producer/engineer Jack Joseph Puig (U2, Rolling Stones).View Deal

Waves REDD: now $29.99 down from $249
Another Abbey Road Studio icon can be yours for just a mere snip of its original price. Based on the legendary REDD.17, REDD.37 and REDD.51 consoles, Waves REDD plugin delivers the classic British sound of the 1960s.View Deal

Aphex Vintage Aural Exciter: was $299, now $69.99
Modeled on one of only a few tube-powered units ever made, the Aural Exciter delivers all the unique character of the original hardware unit, with all the advantages of software.View Deal

C6 Multiband compressor: was $299, now $23.99
The ideal tool for de-essing and de-popping in the studio or onstage. The C6 gives you all the multiband compression and dynamic equalization you need to shape your sound.View Deal