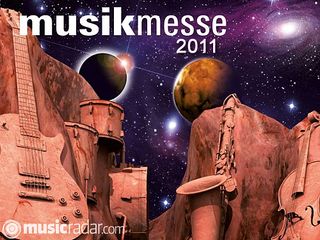 All the action from the show floor.

Day three of Musikmesse 2011 has allowed us time to get up-close with even more bits of exciting new gear.

We hit the Line 6 booth to get some hands-on video with their new POD HD and M5 Stompbox Modeler. We've been over to see Yamaha to check out their new range of MOX workstations and get the details on their DTX electronic drum kit range. Plus we've got a full video demo of Roland's Jupiter-80 synth.

We even found time to head over to the Fender stand to get photos of everything they've had on show. Lovely stuff.

Pearl unveils Throne Thumper
Feel the beat through your seat