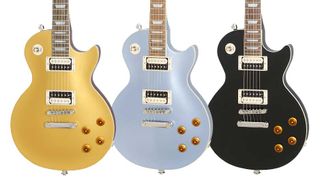 The 10 best electric guitars under $/£500: our pick of the best guitars for beginners and experts

In the run-up to Black Friday, Guitar Center's deals keep coming. Hot on the heels of its $499 Martin acoustics it's got another scorching deal – this time with the Epiphone Les Paul Traditional Pro-III.

Guitar Center is offering $100 off select finishes of this nicely spec'd LP, which brings the total down to a tasty $299.

Epiphone's spec for dollar ration consistently impresses us, offering superb value for classic designs. And we've especially got our eyes on the Pelham Blue finish included in this pre-Black Friday deal.

The three finishes included in the $299 deal - which you can see above - are Pelham Blue, Ebony and Metallic Gold; the Wine Red and Pacific Blue finishes are down to $349.

We can't image a better-appointed Les Paul appearing for this price or less elsewhere in 2019.