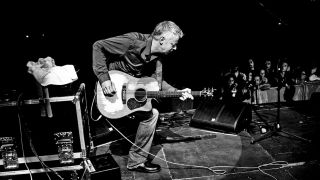 Even a cursory look at our list of the finest acoustic players of the last 12 months offers a cross-section of bonafide legends, established names and exciting young players – the level of talent on offer is, frankly, formidable.

Our winner Tommy Emmanuel was a clear favourite, bagging almost a third of the total votes cast, but every musician on this list is capable of making your jaw drop and your heart ache.

The Australian wizard has long been hailed as one of the impressive players in the acoustic world and few will debate his position at the top of this list. Tommy kicked off 2019 by collaborating with another iconic player, John Knowles, on the covers album Heart Songs and has spent another year globe-trotting, taking in Europe, Asia and three stints across the US.

Richard Thompson: “I think you can dream a song”

Thompson celebrated his 70th birthday in 2019 as many of us would choose to, by playing a concert at London’s iconic Albert Hall. The UK folk-rock icon spent the bulk of the year across the pond, touring extensively in the US – and somehow found time to pen an evocative soundtrack for HBO’s hair-raising WWII documentary, The Cold Blue.

Me and my guitar: Mike Dawes

The spider-fingered British acoustic acrobat spent some time on tour this year with Tommy Emmanuel, who is among the few players on the planet with something left to teach Dawes. He’s not had an album out since 2017, but Dawes’ ability speaks for itself.

Rodrigo y Gabriela: “I think, ‘Did I actually play that?!’”

Mexican duo Rodrigo y Gabriela changed many people’s perceptions of acoustic music when they broke through in 2006. 2019’s new album Mettavolution included an half to an exploratory cover of Pink Floyd’s epic, Echoes, proving they still have the power to wow 13 years on.

The English folk guitar legend released his latest record Rooted in 2019, which channeled his love of nature and social/environmental concerns, showing off a geographically diverse catalogue of folk tunes and originals in the process. The playing – whether on acoustic, or banjo – is as alternately course, crystalline and breathtaking as we’ve come to expect.

Andy McKee is one of the players most responsible for reinvigorating our view of the acoustic guitar in the last 20 years. He still tours and performs solo, faithful to the style he has spent a life honing, though did find time for a jam with Jordan Rudess of Dream Theater earlier this year.

Molly Tuttle: “I became more and more obsessed with playing”

Releasing her debut album When You’re Ready in April, the bluegrass-influenced fingerstyle whizz showed she has evolved from the traditional material on which she was raised this year. The record is a more personal, song-driven collection than some may have expected, but the likes of Take The Journey are built on some incredible acoustic chops.

John Butler spent a large chunk of 2019 supporting last year’s excellent Home album, as well as advocating for climate action in his home country, Australia. We also enjoyed his campaign to rename the decaf soy latte a ‘Decoy’, which we appreciate is largely irrelevant to his innovative approach to the acoustic, but is, nonetheless, an issue that deserves your attention.

The Devonshire folk guitarist and singer has continued to tour his 2018 record Hummingbird throughout the last year. He also fulfilled his nerd dreams by appearing on That Pedal Show back in June in order to talk guitar nonsense.

The Swedish guitarist had a big year in 2019, unveiling her first original material in October, with the sublime Last Time. It’s a nice way to mark the encroaching 10 year anniversary of her first post on YouTube.