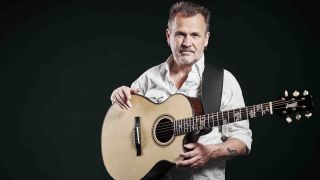 Whether he’s handling an acoustic, lap steel, banjo or electric, Martin Simpson is a master of his craft, and 20th studio album Trails & Tribulations provides yet more evidence of his learned songwriting nous.

With 40 years of experience - solo and with the likes of Richard Hawley, Bonnie Raitt and Martin Taylor - to draw upon, we asked Martin to let us in on a few of his finest songwriting tips, and he was happy to oblige. Read on and take note!

“Listen to the way people talk… some of the best hooks in songs are taken from the beautiful clarity and poetry of everyday speech.

“There is great power in tapping into the common usage of language; Hank Williams knew that, and Bob Dylan certainly does - those are not bad writers to emulate.”

2. It’s easier than it sounds

“Study form, listen to your favourite songs and writers, and ask yourself what they are doing that appeals to you. It’s a really good thing to recognise, that often a song is much simpler in form melodically than it might appear.

“Repetition is a part of verse form, so line A is repeated, then the next line differs, and the last line is line A repeated again, that’s AABA. ABBA is not just a magnificent Swedish pop group.”

“When it comes to writing melodies, don’t just use chord sequences as your building blocks. Sing lines, play lines and actually write them down.

“One of my favourite musicians, Andy Cutting, writes his exquisite tunes when he’s out walking his dog. He whistles and sings into his mobile phone and then translates that into his arrangements on his instrument of choice.”

“Allow the lyrical content of the song to dictate form, rather than the other way around. I have written several songs where the words necessitate that I write in time changes, and complete melodic shifts, in order to express what I need to say.

“There is no need to conform to verse, verse, bridge, verse when there is the opportunity to write a more interesting piece which draws the listener’s ear through its varied structure.”

“Make notes constantly - don’t think you’ll remember that brilliant line that pops into your head just before you fall asleep, because you probably won’t. Even a short phrase is worth saving - it could be the basis of an entire song. If you think of a great potential title, write it down…

“I have notebooks going back 45 years or more, filled with scribbles and ideas, some tiny, some expanded, some turned into full songs. It’s a treasure chest.”

Trails & Tribulations is out on 1 September 2017 via Topic Records.