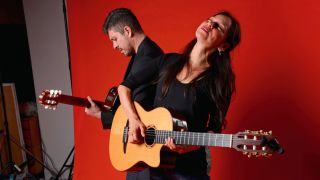 Guitar duos rarely come as sonically expansive as Rodrigo Sánchez and Gabriela Quintero. Following the dissolution of their heavy metal four-piece Tierra Ácida in 1997, the pair decided to switch electric noise for nylon acoustics and go it alone, eventually relocating some 5,000 miles from Mexico to Ireland in order to pursue their new shared ambition.

From busking on the streets of Dublin to topping the Irish charts in 2006 with their self-titled second album, performing in front of presidents and scoring for Hollywood blockbusters, their success serves as a stark reminder for how taking creative risks can pay unforeseen dividends.

On a UK visit ahead of releasing fifth full-length Mettavolution, the two guitarists reflect on their journey so far and explain how the two-pronged attack of Gabriela’s engine-room rhythms and Rodrigo’s fret-burning leads brought mainstream success...

You’ve said in the past that you don’t consider yourselves flamenco or typically Latin musicians...

Gabriela: “That’s true, a lot of people think we play Mexican or South American music... but we don’t! Our influences come across all sorts of different genres. It’s not just that one style. Like a lot of kids around the world we grew up listening to rock bands. I think a good role model for us in terms of Mexican music would be Carlos Santana. He’s an incredible rock guitarist; we are very proud of Carlos Santana. So he influenced us in the sense of being a role model, plus he plays with a lot of feeling and emotion.”

Rodrigo: “There were more Latin flavours on our debut, especially in the rhythms. Though, to be honest, I grew up mainly playing heavier music. Everything I learned during those years I transferred from electric to acoustic. That in itself is an unorthodox approach to acoustic... together we realised we complement each other’s styles with very different approaches. That’s what makes us sound like a band - with two of us covering all the different roles. I guess Gabriela is more like the bass player and drummer, while my parts are more like that of a guitar player or singer.”

Would you say there are any flamenco musicians who did inspire you... even if only slightly?

Gabriela: “It’s a very specific style of playing. You need to be really, really good to be a flamenco player, ha ha! For me, the god of flamenco guitar was Paco de Lucía. I first heard him in my mum’s music collection, where there were also records by The Beatles and The Rolling Stones and everything else. Paco had a very incredible story behind him, it’s very inspiring to hear his music. That said, I don’t think we’re hugely influenced by him... we’re just not as good as those guys, ha ha!”

What do you feel are the most challenging Rodrigo y Gabriela songs for you to play or others to learn?

Rodrigo: “The earlier stuff is pretty challenging. Probably a song like Juan Loco, which has a lot of Latin flavours... that’s generally what I find more difficult to play. Back then we didn’t really know what we were doing, ha ha!

"This new album feels broader and I’m a lot more comfortable in everything I play, it’s more my ground. When I move into that Latin feel, I feel like I’m pushing my limits. I listen to some of those early solos and think, ‘Did I actually play that?!’.

"A few years ago we celebrated the debut’s anniversary and it was fucking hard to do! I don’t think we played the songs as fast... not that speed should ever be the point of it all.”

You moved from Mexico to Ireland in order to get your music heard. Did that feel daunting at the time?

Gabriela: “It wasn’t massively scary... we were more excited than fearful of the big move. At the time, we’d finished playing in Tierra Ácida (Acid Land) and had become conscious of our own decisions. We’d quit any dreams of becoming famous or recognised, and decided to redefine what success meant to us.

"We were still quite young, so we decided it would be more about playing music, learning and growing as performers... but also travelling the world. It all came down to travel and growing! It was never about getting a record deal... we were sick of that mentality because it gave us so much frustration back in Mexico City. So we flew from Mexico to Paris and then to Dublin.

"When we arrived, that’s when it got a little scary - it was freezing and we couldn’t speak English. We ran out of money in a week - we originally thought we could play in restaurants but had no idea where or how to even begin asking.

"We only saw Irish pubs everywhere, so we started to play in the streets and began to attract more and more people. Every time we went back out, it would feel scary and then by the time we finished I felt like fuckin’ Buddha, you know? Totally illuminated, ha ha!”

You have such different approaches to guitar - have you ever tried swapping your parts around?

Gabriela: “That would be a great idea because I love to play lead and over the last few years I’ve started practising more with a pick. Originally I used to play all the melodies with Rodrigo until we realised we would capture people’s attention better with me playing the beat. We’ll need to convince Rodrigo... but he’ll need to practise with his right hand too!”

Rodrigo: “It’s not only the fact that I use a pick and Gabriela doesn’t but more about how our parts complement each other. I was never really the guy that wanted to become the next guitar hero or anything like that. I much prefer the process of composition than playing scales super fast.

"I know a lot of the ins and outs of Gabriela’s technique and can do some of what she does with the right hand... but to do it properly in a show?! I’m not sure. That said, we have been thinking about playing one of the old songs the other way round just to see if anyone notices!”

A lot of your music feels harmonic minor-led... how important is that scale in terms of how you write and improvise?

Rodrigo: “I honestly don’t know much about music. I have no idea what the harmonic minor scale is. Anything that I do say would be completely made up...”

Maybe some of it came from those teenage years listening to Metallica?

Rodrigo: “I wouldn’t know if Metallica play it either, ha ha! If someone tells me I use harmonic minor, I guess I understand a lot of it feels minor. I just follow my ears... if it sounds good to me, then great. I have no idea about the names for scales and mode or anything like that.

Gabriela: “For this record, we’ve written things very differently. Me and Rodrigo came up with the melodies almost like they were vocals... you can sing all of them. We even wrote lyrics to the melodies and then we arranged the piece for two guitars, so they were born almost like songs.

"My theory on why so many people enjoy our music is that they expect Mexican musicians to sing in Spanish and we don’t sing in any language! That gives us more acceptance and breaks down the cultural barriers.

"Our music is almost like electronic music - it doesn’t have a voice but keeps people dancing and hooked to the rhythms. It’s that beat which carries across in a live situation. If we came from a purely guitaristic point of view, maybe we wouldn’t have gotten this far or been able to play rock festivals!”

Gabriela, can you tell us some of the secrets behind all the different percussive noises you get out of your instrument?

Gabriela: “Those different noises come from a very specific technique... and though sometimes I go a little crazy on stage, most of the time it doesn’t require much strength. I’ve found certain moves that help me keep the beat while also being able to play melodies, harmonies or chords over the top.

“The percussion mainly comes from my right hand, as my left hand is what is used for fretting and muting. On the beat, I will hit the bottom of the guitar near the bridge - that’s where you get the low-end sounds. Towards the arm of the guitar, you can get more of a snare drum sound. If you use both, it can start sounding quite close to an actual drum kit!

“It all comes down to the dynamics of your movements. Some patterns are led by the right hand, which gives them a different sound to ones starting on the left. I might also use a wah-wah pedal over tiny percussive sounds - you can make them sound completely different... almost like another instrument. Generally there are five or so patterns I stick with; I don’t vary it too much. These moves have changed slightly over the years, but they came naturally through hours of practice.”

Rodrigo, we’re guessing that’s how you built up a lot of that right-hand alternate picking?

Rodrigo: “Now that’s something I know a lot about. It all came from starting very slow and increasing the speed. When I was young, I really cared about being able to play fast runs. Eventually I realised it wasn’t my thing, but I’d practised enough to have what I needed.

"My advice would be don’t dwell on speed. That feels like an old version or model of how to approach the instrument. It’s much more valuable if you know how to stick to good melodies. Look on the internet, there are so many players who have practised hard to get so fast. But I think your energy is better spent on writing something good rather than being technically impressive.

"If you want to make a living out of music, it all comes down to good tunes and compositions. Forget about speed. If you do learn all that, remember to only use it where necessary and do your best to forget about it!”

You’ve worked on music for blockbuster film franchises including Shrek and Pirates Of The Caribbean. What did you learn from those experiences?

Gabriela: “For me, those experiences have been incredible. It feels amazing to translate from something visual into something sonic. [Renowned film scorer/producer] Hans Zimmer knows how to convey the emotions of the characters on screen as music; he came across as this crazy and super- talented guy, we loved him.

"What I learned was that the sounds can become even more powerful than the film! Good films are made even better by good scores. For Pirates... whenever one character would appear on the screen, there would be particular melody for that particular individual.

"The musician has to create from the emotion of the visuals. It’s kinda crazy as a musician to be sat there waiting for a picture to appear... generally for most of us, it’s music first! These have been fun and humbling experiences to work on.”

Rodrigo: “Ultimately, I believe it was a different way for us to explore music. It’s such a different industry, which on the one hand is obvious, but we didn’t really understand how much until we were there being part of it. We’d love to do it again, though it’s not for us to decide... We are simply guests for the directors who decide on what is needed for each film.”