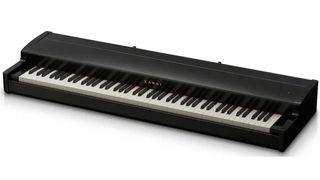 It’s like one of those dreams where everything’s familiar but weird. You sit in front of a sleek ebony slab with a gorgeous grand piano keyboard but no controls save for the single power button.

On the back panel are MIDI and USB ports but no audio jacks. Something seems wrong, until you connect it to a good virtual software piano, at which point everything you play is incredibly right. This is what Kawai’s new VPC-1 does.

Kawai has been installing real piano actions (or close to them) in digital keyboards for about 25 years now. Stage pianos like the MP-9500, MP-8 and MP-10 were jam-packed with gig-ready sounds. Various models had zone faders, control knobs, pitch-bend and modulation wheels, and even XLR outs with a ground lift switch.

With the controller-only VPC-1, Kawai has gone minimalist, leaving just (and I really shouldn’t say “just”) an exquisite graded piano action with real wooden keys and very ivory-like key surfaces. The net effect is a first-rate physical piano feel which, when married to one of today’s superb software pianos, gets better and better as you play it and encourages you to master musical passages that would normally make you feel trepidation.

The VPC-1 ships with the substantial Kawai triple-pedal array that convincingly emulates half-pedalling and after-pedalling on the damper as well as correct behaviour of the sostenuto and soft pedals. There’s MIDI in/out and a USB port that will power the unit, so you don’t need the power supply unless you’re controlling a sound source via five-pin MIDI. The “killer app,” though, comes in the form of touch curves that were customized by working closely with the makers of four popular software pianos: Synthogy Ivory II, Native Instruments Alicia’s Keys, the Galaxy Pianos, and Modartt’s physically-modelled Pianoteq.

A real grand piano action is a Rube Goldberg contraption of moving parts that translates the downward motion of your fingers into the upward motion of a felt-covered wooden hammer. Along the way, this mechanism has to shock-absorb the key after your finger strikes it, keep the hammer from bouncing back and forth, lift dampers on a per-string basis, and do other things that let you transform subtle (and not so subtle) forces into musical tones.

Kawai’s solution to the complaint “Why doesn’t my controller really feel like a piano?” is to adopt a real piano mechanism. They craft their keys, white and black, from long pieces of wood that balance on a pivot point; so when you play you feel real-world resistance and the see-saw motion of a weighted, balanced key. Like on a real piano, the VPC-1 key doesn’t directly strike the noise-making apparatus but instead actuates a second mechanism, and that generates the MIDI velocity information. That info is then read by three sensors instead of the industry-standard two. This helps you repeat notes quickly and accurately, even when you barely play the tops of the keys. Kawai has also built-in let-off simulation, that little bump you feel at the bottom of a very soft keystroke, to subtly resist your finger motion and let you navigate soft passages with greater nuance. Think of it all as “physical modelling” in its most literal sense.

It must be pointed out that Yamaha puts actions that are almost part-for-part identical to a concert grand in some of their digital pianos (notably the AvantGrand family and NU1), and with excellent results. But the VPC-1 is the only action of this complexity that we’re aware of in a “slab” keyboard, let alone in a controller-only one.

Anyone who has ever struggled with tweaking velocity curves for piano knows that you usually compromise. You often have the vague sense that if you spent another hour or two the feel would be perfect, but it never is. Kawai has addressed this frustration by creating five touch curve presets one for each of the aforementioned software pianos, plus a “normal” curve. I played them all with Synthogy Ivory II American Concert D, my gold standard for software pianos and found something to recommend in each of them. All in all, the normal curve suited my playing style best. The Ivory-customised curve was perfect for delicate play but was actually a little too heavy-handed for my fortissimo boogie-woogie romping. Touching the power button plus one of the top five black keys changes curves, and I easily went back and forth between my top two choices, depending on how much delicacy versus bombast I needed. I had a similar experience with the curve designed for Pianoteq.

For more customisation than the five factory curves, Kawai has created touch curve editing software that gives very fine-grained control over the velocity response. You can graphically create curves for the entire keyboard, note groups, or individual keys. You can also go key-by-key, registering key strikes for a customised curve based on your finger strength and playing style. You can also assign pedal CCs and load five of your own curves into the VPC-1. The only caveat is that the editor software is only for Windows at the present time.

The VPC-1 is a controller for a piano purist. The triple sensor array does give you a richer playing experience than the dual sensors found in most weighted keyboards, but it’s worth noting that a Casio Privia PX-350 has triple sensors at roughly one third the price and weight. What you won’t get there is the physical gravitas of a real piano action playing a mega-memory software piano. Kawai marketing director Tom Love tells us that the RM-3 Grand II action in the VPC-1 is exceeded only by the Grand Feel Action in the Concert Artist series, the high end of Kawai’s home digital pianos with console cabinetry.

The VPC-1’s action is so convincing, in fact, that it feels sluggish on an EP or organ, but you can use it with something as fundamental as Apple GarageBand. (In fact, it makes the GarageBand piano play much better.) However, you won’t be bending pitches or adding modulation unless you plug a controller or synth into the MIDI input. And though the VPC-1 does send release velocities, Ivory II governs its release samples via attack velocity and note duration. Virtual instruments that do track release velocities will read the VPC-1’s action loud and clear.

In what seems to be a case of aesthetics over function, Kawai made the top of the VPC-1 curved, not flat, kind of like a Rhodes Mark I. As on the old Rhodes, you could adhere some Velcro to stabilize your ultrabook, iPad, or fairly lightweight synth. But there’s no putting a Motif or Kronos up here in order to save a tier on your keyboard stand.

For the classical artist in a studio apartment, the touring pro who wishes to dedicate a slab of 88s to the piano they’re running on a laptop or Receptor, or the studio owner who wants to roll out the big guns when Norah Jones comes over, the Kawai VPC-1 will become the controller of choice. It offers a kinesthetic musical experience that you just can’t get without wooden keys and the physical machinations of a grand piano action. In my opinion, pitch-bend and modulation wheels (and a flat top) would not have tainted its pianism and would expand its appeal. That said, for finger-to-music connection when playing today’s best software pianos, nothing touches the experience the Kawai VPC-1 serves up.

Cons: Touch-Curve editor is Windows-only with no Mac version on the drawing board. Curved top makes stacking another keyboard or laptop difficult.

Bottom line: If you need is a perfect software piano controller and nothing else, no other keyboard comes close to the Kawai VPC-1.