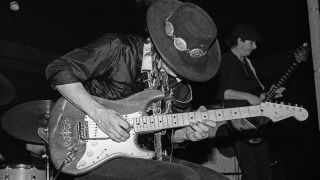 The slow blues jam inspires a mixture of joy, dread and cynical rolling of the eyes among us guitarists.

Often these situations involve a minimal, simple backing, with little to inspire interesting chords or funky rhythms! Having said that, Stevie Ray Vaughan, Jimi Hendrix and other players who have created exciting, inspiring solos in this very context would not use this as an excuse.

Rather than trying to be too complex, I’ve opted for a ‘reinventing the wheel’ approach, coming to this solo as if it’s the first time I’ve played a blues solo. There are three main considerations.

Firstly, dynamics: controlled by picking strength, pickup selection and volume control to increase/decrease gain to obtain countless tonal shades. Secondly, we have the obvious choice of how much to play – or not to play. A fast flurry of notes followed by silence would be the ultimate expression of this, though the rhythm of phrases and melodies is generally a prime consideration.

Finally, I’ve exploited the lack of harmonic ‘information’ in the backing track to use both major and minor ideas, sometimes switching tonality quite abruptly. I hope you enjoy!

This sustained E9th chord, is a strong base to improvise a few licks that imply the same harmony for the next few beats. I’ve also stated the A chord in bar 2 before having a play with the G and D major triads close by. Pulling out a couple of more traditional licks for the return to E in the next two bars allows a ringing, full sound. The double stops leading from bar 3 to 4 are played using pick and fingers.

The long A7 at the start sets the stage for the first bar, changing to A minor 7th in the second, introducing a bit of minor pentatonic before this The Wind Cries Mary-style E major. This is where we stay for the next two bars, using the convenient doublestop hammer-ons between the 9th and 11th frets that give implied harmony. We’re not playing chord melodies but it’s filling a lot of space melodically!

Skipping to the beginning of the next 12 bar progression, here we see how the solo has progressed a lot further into traditional ‘lead’ guitar territory. Theoretically, the ground has been laid during the first time round the chords, and now we can play a little more comfortably. This is an improvisation, so the notation is a little quantized, but with the audio as a guide it should work fine.

Tackling the B or V chord, I’ve started by outlining a B major triad (actually, hammering on from the D natural that would imply a B minor one in a typical blues style) then playing with some slides, before transposing a very similar approach down two frets to A and extending the lick across to the lower strings. We finish by reiterating some traditional open string ringing licks and marking the turnaround to the B chord – this time with a minor feel.