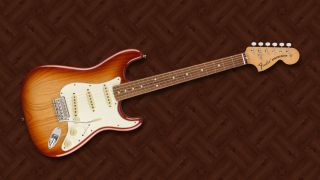 Chicago blues giant Muddy Waters’ first 'guitar' was a length of wire nailed to the side of his shack in Mississippi. He played slide on it with a rusty bolt.

Of course, these days, apprentice blues guitar icons like you don't have to go 'round the houses to land a great six-string. We've done the legwork for you to uncover the very best guitars for blues.

Vintage icons, modern classics, wild cards, not to mention a Fender Telecaster that changed the world. We've picked eight killer guitars to suit a wide range of budgets... and each and every one excels at electric blues.

What is the best blues guitar?

When it comes to the best blues guitars at an affordable price we can't see past the new Fender Vintera range. In addition to the sublime ‘70s Stratocaster featured in this guide, the Vintera Series offers up beautifully made repros of other classic Fender models, too.

We recommend that you paw at the various ‘50s, ‘60s and ‘70s era Strats and Teles on offer. Just make sure the 70s Stratocaster we've fallen in lust with gets some attention. The big CBS-era headstock does its bit to promote sustain. The pickups are slightly hotter than the ‘50s and ‘60s models which overdrive freaks will love.

Best blues guitars: buy the right one for you

There are two ways to approach buying a guitar for blues. First, get your hands on what your hero plays. If you love Texas blues behemoth Stevie Ray Vaughan's sound you're probably going to end up with a Fender Stratocaster.

He may have passed away in 1990 but SRV's single coil pickup-fuelled hot Strat sound is still as popular as it gets in contemporary electric blues.

The second approach is to explore a bunch of guitars to find out what you like. It's the thrill of the chase. At the very least you'll want to compare guitars with single coil and humbucking pickups.

As a general rule of thumb, Fender-style single coil pickups offer excellent note clarity no matter how much overdrive or distortion you kick in. They also sound exceptionally sweet through an amp's clean channel. Check out Jimi Hendrix' tone on Little Wing for the ultimate single coil blues sound.

While Gibson-style humbucking pickups can sound a tad muddier when exposed to a lot of distortion, the upside is a fatter tone. They also suffer from less background noise than single coils. That's what they were originally designed for. They 'buck' the hum…

Scale length is another consideration. This is the distance between the guitar's bridge and its top nut, the slotted slice of bone or plastic near the first fret. Fender guitars have a 25.5" scale. Gibson models come in at 24.75".

What's the difference? Well, Fender Stratocasters and Telecasters have a tightly defined 'twang' in the bottom strings. The extra tension of the 25.5" scale is also good news for tuning stability.

Your classic Gibson Les Paul has a deeper tone, offers easier string bending for blues - even with heavier strings - but can suffer from tuning issues. Both setups have their pros and cons. The fun part is finding out which you like best. Not sure where to start? Our best blues guitar guide should help.

The best blues guitars you can buy right now

A vintage spec blues tool for less than a grand...

Fender's New Mexican-built Vintera Series offers a lineup of vintage spec classics at affordable prices. The 70s Stratocaster is a favourite thanks to its big headstock - as loved by blues nuts like Jimi Hendrix and Walter Trout.

The 1970s was not a great period for Fender quality control. Despite the fact that original examples are becoming increasingly more expensive, tone and build quality can be hit and miss. The Vintera brings that era to life with way more consistent build quality and finish.

The three vintage-voiced single coil pickups transport you back to the ‘70s like an episode of Life On Mars. Every classic Strat tone is on offer, including those Jimi-flavoured 'in between' sounds.

Right now, this is the best blues guitar you can buy for the money.

A descendent of what many consider the best blues guitar ever...

When it comes to the best blues guitars, some swear by Fenders, while others consider the Les Paul Standard the cream of the crop. The latest Standard ‘50s ticks every box on that iconic spec sheet. The body is mahogany with a maple cap. The mahogany neck is glued in place. A rosewood fingerboard plays host to 22 chubby frets. Tick!

Gibson hasn't really broken the mould with this LP, and that's music to our ears. It didn't need fixing. There's the usual exceptional sustain on tap, and the beefier ‘50s neck is a joy to play.

As expected, the Les Paul Standard '50s comes loaded with a pair of humbuckers for proper old school British tone as obsessed over by self-proclaimed blues geek Joe Bonamassa.

Jimmy Page used a '59 Fender Telecaster on the first Led Zeppelin album; and the solo of Stairway To Heaven. The new Jimmy Page Mirror Telecaster replicates that iconic machine. It even comes with shiny stick on discs like Jimmy had when he played the Tele with The Yardbirds.

Playability is exceptional thanks to a medium C profile neck. The guitar is lightweight too. A two-piece ash body sees to that. The noises are provided by a pair of '59 spec pickups. Telecasters of that era had plenty of grunt. That's why Jimmy's Telecaster was often mistaken for a '59 Les Paul on record.

This is easily one of the best blues guitars money can buy. You can stick the optional mirrors on for some reflected glory...

Serious bang for your buck from the other Mr Paul

The ‘Paul’ mentioned in this SE's model designation is Mr PRS himself, Paul Reed Smith. This model is designed to get you as close as possible to the posh USA-built PRS guitars without the high price tags.

Construction-wise, the SE follows in the classic footsteps of the Les Paul. A mahogany body is topped with maple which is in turn beautified with a veneer (aka thin slice) of flame maple.

The neck features the supremely comfortable PRS ‘Wide Fat’ profile. Chunky frets add to the great playability. The pickups offer a modern take on iconic Gibson PAF humbuckers with access to a range of sweet and savage vintage and modern blues and rock tones.

The genius of the Epiphone Les Paul Standard PlusTop Pro lies below the skin. Yes, it's a fine looking beast, but it's the super-slim neck profile that'll snag many punters. It feels more like a modern rock guitar.

Figure in the chunky frets and dyed in the wool shredders might switch allegiance from pointy widdle machines to their first Les Paul.

This model comes in an incredible range of finishes, and features high spec nickel-plated hardware. Pickups are Epiphone's much respected ProBuckers.

This Les Paul can handle everything from 60s British blues – Eric Clapton, Peter Green – to the high-octane tones of Mr Bonamassa, Gary Moore and Slash, making it one of the best blues guitars for smaller budgets.

You know the drill. Only rockabillies play Gretsch guitars, right? Actually, Gretsch gear can handle blues as well as anything else with six strings. The, deep breath, G5655TG Electromatic Center Block Jr features higher output pickups. That makes it more like a contemporary blues rock brute than the classic Gretsch ‘50s throwback.

The G5655TG features a semi-hollow body with a center block to help reduce unwanted feedback. The body is inherently bright sounding thanks to the all-laminate maple construction.

Plugged into an amp, that aforementioned classic Gretsch treble is tempered by the beefy sounding Black Top Broad'Tron humbuckers. Lest we forget that a Gretsch provided the rhythmic backbone to AC/DC for decades. So, yes, this Gretsch can handle different shades of blues...

Probably the most affordable blues rock icon you'll ever play

Despite the fact that Danelectros are built from the kind of stuff you might use to knock up a cheap kitchen, Jimmy Page made them iconic. The 59XT is basically a pimped version of the guitar Page brandished onstage with Led Zeppelin.

The lightweight body is formed from sheets of composite material glued to a plywood frame. What really makes these guitars exceptional however is the pickups. Here you get a fat-sounding twin lipstick tube bridge humbucker paired with a big retro style neck single coil.

Tonally, the 59XT pumps out crystal clear blues, rock and surf tones, not a million miles away from a plump-sounding Telecaster. You get a whole lotta righteous tones, killer playability... and the chance to look as cool as Mr Page.

The S-200 T-Bird might look like something that dropped from a flying saucer in the 1960s but it certainly deserves its place on this best blues guitar list. Spec-wise, it's actually quite close to the mighty Gibson SG.

The mahogany body and set mahogany neck construction promotes a humongous level of sustain. It's no wonder blues cats like Muddy Waters and Black Key Dan Auerbach played original versions of this six-string eye candy. Fear not. The reboot has all the tone and sustain of its ancestor.

A pair of powerful LB-1 mini humbuckers pull the maximum amount of tone from those timbers. In terms of tonal range, the T-Bird offers everything from 50s Chicago R&B to AC/DC level blues rock.

About the author
After 20 years in guitar retail, Ed Mitchell joined Total Guitar as reviews editor. These days he contributes to Guitar World, Total Guitar, Guitarist Magazine, MusicRadar and Classic Rock as a freelance writer and reviewer.