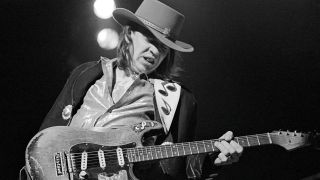 The late Texan blues guitarist Stevie Ray Vaughan was certainly one of those players whose influences were assimilated and then combined to create his own distinctive musical voice.

Those influences included the three Kings - Albert, BB and Freddie - plus others such as Muddy Waters, Lonnie Mack, T Bone Walker, Jimi Hendrix, Lightnin’ Hopkins, Albert Collins, Larry Davis, and Johnny ‘Guitar’ Watson - not to mention a jazz influence via Kenny Burrell and others.

Without doubt, though, one of Stevie’s earliest and most important influences was his older brother, Fabulous Thunderbirds guitarist/solo artist Jimmie Vaughan. Stevie often mentioned Jimmie when it came round to the subject of his first guitar hero.

Stevie was a master of all the many techniques that are associated with the blues, such as vibrato, string bending, phrasing, groove and much, much more.

He commonly detuned his guitar by a half step to Eb. The main reason for this was initially to facilitate his vocal range, but as a byproduct it also facilitated the use of heavier strings, something he would become renowned for. He often used a .013 as his high E and a .060 as the low E. For this month’s piece, however, I’ve opted to remain in standard tuning - so thankfully no retuning (or extra-tough fingers) required!

This piece is an example of a less common 16-bar blues sequence that’s also played with a ‘straight’ feel, not a ‘shuffle’ or ‘swing’ feel. Songs such as Couldn’t Stand The Weather and Crossfire spring to mind as a couple of examples that used similar ‘feels’ in Steve’s back catalogue.

Bars 1 to 8 are all played around the I chord (E) and involve a lot of syncopation - and even a cheeky stop/rest in bar 7. This whole section is a lot trickier to play than it might seem (especially at this slow-ish tempo), so take care. It’s great for your timing and phrasing, though.

In bars 8 to 16 we have four bars of the IV chord (A7), then two bars of the V#9 chord (B7#9), and finally two bars of an altered I chord (E7#9). By contrast to the preceding section, this one is far more chordal and rhythmic in nature and is pretty varied, containing a mixture of single notes, diads, triads and four-string chords.

One of the most used phrasing ideas - in all styles - is that of a musical ‘question’ that is followed up with a complementary musical ‘answer’, and you’ll find examples of this in SRV’s music, too. In this particular four-bar phrase, it’s easy to see how this is simply two one-bar question/answer licks played back to back. Notice that they don’t need to be structurally identical - just similar to each other. If you imagine that you’re having a musical conversation with yourself, you’ll be in the right ballpark.

There are two interesting ideas found in this four-bar section. The first, seen in bar 21, is the ‘blues rake’. To play this, you simply need to sweep across the strings using a continuous upstroke. The aim isn’t to be overly melodic; it’s more of an effect. Target the final note, keep your picking hand relaxed, release the notes immediately as they sound and all should be fine.

The second idea, the ‘Albert King grab’, is found on the last note of bar 24. This is simple but works fantastically well. All you do is grab the E string and pluck it hard with any available picking hand finger and let it slap against the fingerboard.

The reason it is named after Albert King is simply because it is an impersonation of when he played a downstroke. He played left-handed but didn’t restring the guitar, therefore the high E string was where the low E string usually is and, as such, he would pick that string the hardest.

This section starts off in bars 25 to 26 with a simple doublestop idea played mostly in eighth notes, which is followed by a more intense ‘three against four’ 16th note lick in bars 27 and 28. This is a great way of building excitement in solos without actually playing anything melodically different.

This final four-bar section kicks off in bar 29 with some cliché doublestops that outline the root and 5th of the B chord. The following bar sees three more ‘Albert King grab’ notes - only this time they are on string bends.

Bars 31 and 32 contain what I call ‘Hendrixian bends’. To play these, you need to bend one string and then let down an adjacent string. Here, this happens twice in succession. First, the E note on the B string is let down to D, following a G-A bend on the high E string. This is followed by a similar move where you let down the G string after a bend played on the B string.

One of the most famous examples of this technique can be heard during the intro to Jimi Hendrix’s classic Red House - hence the title of this example. Try it, it sounds great!