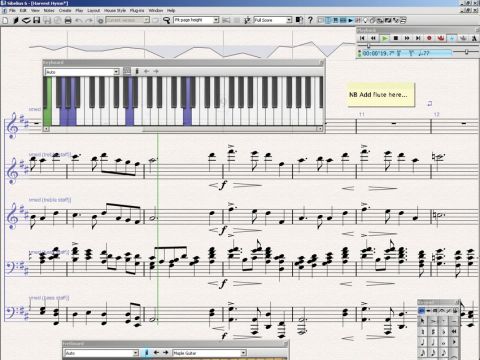 A superb scorewriter just got even better, with Magnetic Layout being the star attraction.

Sibelius began life in 1993 as an application for the Acorn Archimedes computer - it was an instant hit and has since become perhaps the most popular scorewriting program of them all.

The latest version for PC and Mac makes a very serious first impression, with a 140-page handbook to prime you on the basics, and a mighty reference tome of 700-plus pages.

Following installation, our attempts at Internet registration were frustrated by repeated Sibelius server crashes, but a painless telephone call later and we were finally up and running.

Sibelius 6 will open files created in earlier versions (except the ancient Acorn one), but it's worth noting that it no longer reads Finale or Score files. MusicXML import has been improved, however, to give better results than Finale import in previous versions.

The previous version of Sibelius used NI's Kontakt Player to provide playback of sampled instruments, but v6 does away with this entirely thanks to a new integrated sound player engine (and enhanced mixer) that needs no setup. This comes courtesy of Avid's AIR division, which is behind Pro Tools instruments such as Strike, Transfuser and Structure.

Of course, a player is no good without sounds, and to this end, v6 includes not just a whole new GM soundset but Sibelius Sounds Essentials, which incorporates over 150 patches from Garritan and Tapspace soundsets.

The Kontakt Player that came with v5 can still be retained for use with older files, but if you bought extra soundsets for those earlier versions, they won't work with v6 as is. However, updates of these can be downloaded from the Sibelius website.

Given that a scorewriter's most important task is, of course, the writing of scores, any improvement to workflow in the process of assembling a neat and tidy score will be a major plus.

As anyone who has attempted to create a professional-looking score can attest, a lot of time tends to be taken up with formatting and making relatively minute adjustments to the spacing of dynamics (and the like), slurs, hairpins, instructional text and so on. If you don't do this, the chances are that your score will look very scrappy, with overlapping symbols in some places and big gaps elsewhere.

Or at least, this is how it has been, prior to the advent of the brand new Magnetic Layout.

This intelligent feature immediately spots where you've been sloppy in your mouse positioning when inputting symbols of all kinds and automatically moves them around, so that they don't overlap.

Thankfully, it still gives you the option of overriding Sibelius to put things where you really want them, in those cases where you disagree with its placement choices. It even moves things when you view transposing instruments in concert pitch or change the stave spacing.

And, where appropriate, it lines symbols up, both vertically and horizontally - eg, dynamics and tempo markings.

It's not perfect, and you may have to adjust staves by hand to create room for really crowded environments, but Magnetic Layout prompts you when you might need to do this anyway. No doubt something similar will be implemented in Finale very quickly, but Sibelius definitely has the edge in this area for now.

Perhaps as important to some will be the newfound ability to use Sibelius as a ReWire slave, so that you can route Sibelius' output and sync it to a ReWire-capable DAW.

Also, if your music requires fluctuating tempi, you can now 'conduct' the piece by tapping on the keyboard - Sibelius will then record the tempo variations (though this feature cannot be used in conjunction with ReWire, since Sibelius works as a slave only).

The resulting accelerandos and rallentandos can be displayed as a graph above the music though, disappointingly, they can't be edited from there. In our testing, this feature seemed rather difficult to control at first and may require some practice in order to be useful.

One new feature that will hold great appeal for those using Sibelius in education is the ability to save Versions - ie, stages in the development of a piece that you can return to and compare to the current state (although you can only edit the latest version). In addition, you can add comments in the form of virtual sticky notes that can go anywhere in the score, perhaps as feedback or instructions for a student.

An onscreen virtual keyboard is now included (as well as a virtual fretboard for guitarists), which can not only be used to input notes via the mouse or QWERTY keyboard but also lights up during playback.

If that still sounds like too much manual labour, then the addition of Neuratron's AudioScore Lite may be of interest - this takes a live monophonic audio input (ie, you singing into a microphone or playing an instrument) and converts it into notation.

There's a host of other useful, if less spectacular, enhancements in v6. For example, the keypad now has an extra layout, including a handy set of repeat signs and jazz-type articulations; cautionary accidentals can be automatically displayed (with or without brackets); there are easy scale and chord diagrams for guitar; and so on.

Whilst we acknowledge that Sibelius' main contender for scorewriting dominance, Finale 2010, is exceedingly good (and will be preferred by some for perfectly sensible reasons), we think Avid has landed a rather heavy hit with Sibelius 6.

In particular, we're enamoured of Magnetic Layout, which will speed up the finalisation of a score considerably, and ReWire support, which could open up a whole world of possibilities (and rather puts Finale's single audio track facility in the shade).

The numerous smaller tweaks and improvements might only ease workflow marginally when considered in isolation, but taken as a whole, they should have you cranking out sweet-looking scores faster than ever.

If you're in the market for a seriously good scorewriter, you need to consider both Sibelius 6 and Finale 2010. But ask yourself first if you really need all of the bells and whistles that both applications provide - if you just need to print out a few bars of something for a real-world musician to overdub, you might get by with the score editor in your DAW.

Listen to a score played through the Sibelius soundset: