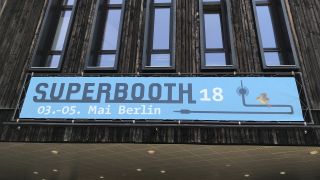 Superbooth 2018: It’s a sad day when we have to wrap up our coverage from a show like Superbooth. Unlike most tradeshows, the ‘booth is a joy to attend.

Yeah, it’s a bit of a slog rushing around trying to shoot video, meet everyone and get pictures of all the wonderful new synths and other gear on show, but when you feel like a kid in a candy store, it’s not all that bad.

It also means that the show is now officially over and we’re having to wait another year before we can do it all again. Well, not if we can help it. Just like any ageing musician, clinging on to former glories, we’re not done yet.

Check out our super highlights package, jam-packed full of the tastiest morsels from the third iteration of the best show in Berlin.

But where to start…?

We seemed to spend a lot of time at the Behringer booth, mostly to catch a glimpse of yet another new instrument being unveiled. If there was an award for most prolific product launches, they would nail it.

Seeing the VC-340 in the flesh and knowing that the Pro-One emulation is in fact real would’ve been enough for us, but no, there was more. Roll on day two of the show and there was news of two more instruments being announced, both of which took us by surprise.

Both bold moves in terms of intellectual property, the 808 and Odyssey clones will certainly put a cat amongst the legal pigeons. We were present at the booth when a very disgruntled Korg employee was wielding a camera and judging by previous cease and desist orders from Roland to the likes of Cyclone Analogic and Propellerhead, we think this may just rumble on.

The Music Tribers were not done though, roll on day three and yet another retro-release. This time it was the return of the SH-101, though now called the MS-101.

Luckily, our timing was spot on as we managed to catch the unveiling and get the first demo. Also in attendance was Martin Swann of Vile Electrodes, who just happens to own a few of the originals himself and who better to take the MS-101 for its inaugural spin.

We were also treated to a glimpse of the new stereo version of the June 60 chorus pedal from the TC Electronic stable, which is an emulation of the infamous Juno chorus, but in stompbox form.

Having skipped on NAMM this year, it was a welcome sight to see a new instrument from Dave Smith and this time we were in the presence of a monster.

The Prophet-X is quite the machine; bi-timbral, 8-voice stereo (16-voice mono) synthesizer that combines samples and synthesis, not to mention all the modulation capabilities we’ve come to expect from a DSI product.

We were treated to a demo from the very capable hands of Gerry Basserman in his new role as trainer and demonstrator of all things Dave Smith/Sequential.