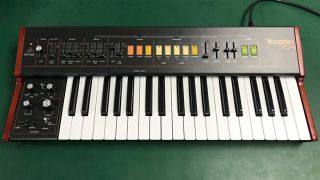 Another day and another Behringer announcement. Although this one has been teased since Christmas Day, unlike yesterday’s out-of-the-blue announcement of the UB-Xa.

First teased on 25 December as an open chassis, has now been revealed to be the VC340, which bears an uncanny resemblance to the Roland VP-330, right down to the wooden sides, control layout and font logo.

It’s not a complete carbon-copy, of course, as the VC340 features just a three octave keyboard - one less than the original.

As there was a desktop version of DeepMind announced very quickly, it remains to be seen as to whether Behringer will be doing something similar and unleashing its own version of the SVC-350.

It’s been a busy holiday period for Behringer as there was a tease of yet another bare circuit board with promise of another analogue clone on the horizon, to go with the UB-Xa.