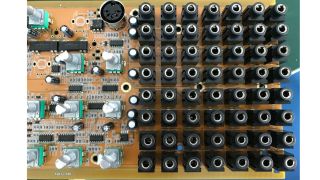 Behringer has kicked off the new year with a little guessing game. The Music Group brand shared an image of a prototype on Facebook yesterday, asking users to guess what it is.

This time last year we were treated to a similar announcement, which outlined the firm’s desire to create a range of drum machine clones. However, we’re yet to see these beatmakers become a reality.

The delay in production of these and, more notably, the Model D, hasn’t gone unnoticed in recent weeks, with many commenters expressing their dismay at the hold up.

Much ire has been directed towards Behringer recently after a supposed glitch on the company’s website last month, which seemed to have momentarily leaked a whole bunch of products.

As for this current prototype, the many guesses include an MS-20 clone and the much-desired ARP 2600. Although, one commenter mentions that Behringer originally planned for 80 patch-points in a previous announcement, whereas we can clearly see just 56 in this patch matrix.

While Behringer won’t be at this year’s NAMM show in the flesh, we have a feeling that it may just share some more announcements around the same time.