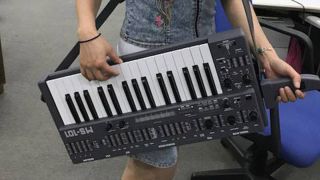 In one of the more curious music technology incidents of the year, Behringer has seemingly announced a raft of new classic synth and drum machine emulations, only to partially disown them just a few hours later.

The tale began yesterday, when a selection of exciting-looking new products appeared on the company’s website. These included emulations of classic Linn and Roland drum machines, and Korg, Roland and ARP synths. The company hinted that it was working on some of these machines earlier this year, and released an image of what looked like an SH-101-style synth in September (see photo above).

However, these pages were swiftly taken down, and Behringer has since attempted to dismiss their existence as a “website glitch”, adding that they don’t “imply any availability at this time or even definitive evidence that we intend to officially develop or deliver these products in the future.” The company goes on to say that “at this stage, the leaked products are merely concepts and nothing more.”

Behringer is insisting that none of this was a marketing ploy, and that the whole thing is an innocent mistake.

As you were, then - which means that you’re still waiting for the arrival of Behringer’s Minimoog-style Model D, which has been available for pre-order for the best part of six months now. In fact, despite all the chatter, the only synths that Behringer has actually released so far are those in its DeepMind range.