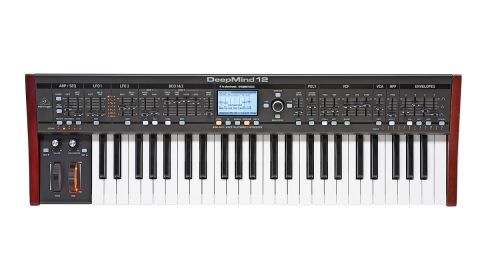 The DeepMind won’t undermine the market for characterful vintage analogue polysynths, but it is flexible and interesting.

After all the teasers the first Behringer synth is here.

The past five years have seen all kinds of musings about it being a Juno-style clone or an ARP monosynth.

It is neither of those, being far more feature-laden than a Juno-106 and polyphonic to the tune of 12 simultaneous voices. Also, with a metal case and wooden side panels, it looks like the real deal. Each voice consists of two oscillators and a noise source.

The first DeepMind oscillator offers a choice of sawtooth and square waves, or both simultaneously, while Oscillator 2 employs only a square wave generator (though the Tone Modulation parameter opens up more tonal variation than you might expect by inserting a second variable width pulse into the waveshape).

OSC1 allow manual, envelope or LFO control of the square waves’ pulsewidth and OSC2 offers similar options for modulating the Tone. Both have independently selectable octave ranges and pitch modulation, but it’s only OSC2 that offers a finer level of pitch control for creating semitone intervals or subtle detuning.

It is rather fiddly when dialing in those smaller variations and, given that not all parameters get their own front panel control, it would have been nice to get control over this from within the Oscillator Edit menu. Also the OSC1 waves are either on or off, whereas the levels of OSC2 and Noise are thankfully fully variable. Finally, OSC2 can be hard-sync’d to OSC1 for further timbral variation. The screen gives a helpful visual guide to what the resultant waveform will look like.

One advantage of the DeepMind’s plentiful polyphony can be found in the Poly section. This is the home of the synth’s unison modes that stack voices in a variety of modes - from simple doubling to a monumental 12 voice monophonic sandwich. Given the relatively pitch-stable DCOs, the Detune parameter plays an important role in fattening everything up by shifting the pitch of combined voices up to 50 cents off centre.

This section is also home to the parameters that allow DeepMind to be a little more like its less linear forebears by applying ‘drift’ to oscillator tuning (and other parameters via the separate Param Drift setting). Drift Rate, provided by a randomised ramp generator, is also available to tweak. These three parameters do help DeepMind escape its, at times, somewhat clinical sound engine. It also would have been great to have had a wider detune range, especially when combined with the ability to use one of the envelopes to control detune amount.

Next, the filter section, which offers both 24dB and 12dB/octave flavours. In both guises the filter can be pushed into self-resonance without an oscillator signal present and can therefore be pressed into service as a pitch-stable third oscillator (with keyboard tracking fully engaged).

Front panel access is also provided for Envelope Depth (hard-wired to Envelope 2) and LFO modulation. The source for this, velocity control over envelope depth, and other modulation settings are accessible via the VCF Parameter Menu. Here you’ll also notice that there’s a Bass Boost feature, which takes its cue from Roland’s Juno range, and gives the low-end a bump. The front panel button for this is found below the HPF control which, like the Juno’s, is a globally applied high-pass filter.

The VCA section consists of one front-panel slider level, which does facilitate overloading the VCA if required. The VCA is hard-wired to Envelope 1 and gets a depth control in the edit menu screen shared with velocity sensitivity and a voice panning parameter. The latter spreads voices across the stereo spectrum - a feature that sounds great when combined with the unison modes.

Given that Behringer’s holding company owns a smorgasbord of music tech companies, including Klark Teknik and TC Electronic, it’s no surprise that it has taken advantage of this for the effects. The manual names the ‘device inspiration’ for each of the 34 DSP-derived effects and many are based on classic units from Lexicon, Roland and others.

There are four effect slots that can be placed together in an insert or FX send configuration. Used as a send, the effects do not interfere with the audio path of the analogue synth engine. Ten different routings, including some with feedback, allow for some very creative effect configurations that go much further than most onboard effects.

The quality of effects, and the scope for editing, is also high. For example, you can add a chorus followed by modulated hall reverb (inspired by the Lexicon 480L) that also feeds back into a pitchshifter and delay which is then routed into the reverb. Instant Eno/Lanois ‘shimmer’.

While the effects may not be quite as good as the real thing, or some of the better plug-in emulations, they are an integral and welcome part of the DeepMind sound.

The DeepMind has independent, software-generated, envelopes for both the VCA and VCF sections, with a third all-purpose envelope for other control duties. Unlike those in the ’80s, these software envelopes can be very fast, with the added advantage of configurable curves for every stage. This vastly expands the synth’s mimicry possibilities.

The two LFOs are also very well-equipped, with each capable of generating one of seven waveforms, though even here the Slew-Rate control allows you to smooth the underlying shapes for further choice. Unlike many vintage analogue polysynths, each voice has its own LFO, and there are a host of ways to determine how each is triggered and their relative timings.

Besides the section-specific routings for envelope and LFO modulation there is a dedicated Mod Matrix with eight user configurable slots. Here 22 modulation sources can be routed to nearly 130 destinations including individual envelope stage times, levels and curves, panning, drift, high-pass filter cutoff frequency, effects parameters and the mod depth of other modulation slots. This section is comprehensive, very powerful and better than many soft synths.

Mention must also go to the ARP/SEQ section. The Arpeggiator has all the features you’d expect, including Swing, but also adds a pattern sequencer that automates velocity and gate time for each step independently of the current ARP pattern.

There are 32 preset patterns and 32 slots for your own. This sequencer shouldn’t be confused with the Control Sequencer - also in this section - that allows you to create 32-step custom modulation sequences. Add to that two types of chord memory function, portamento, pitch and mod wheels, and that’s almost it, in terms of control, until you peer around the back and find the Pedal/CV input plus MIDI and USB connectivity.

However, the final string to the Behringer’s bow is wi-fi connectivity (both as client or access point) that supports rtpMIDI. In fact all three MIDI connection methods can work simultaneously, with the option of DeepMind acting as a MIDI hub and passing data between wi-fi, MIDI DIN and USB ports.

One possible criticism of the DeepMind’s editing system is that not all parameters are available via front panel controls. Others are accessed from Edit buttons that offer screen- based tweaking. Frustratingly, the software editor takes a similar approach and requires you to open and close individual windows to edit various groups of parameters.

While DeepMind is certainly interactive and powerful, it lacks the immediacy of some simpler classics like Roland’s Juno-106 or Jupiter-8. For example, an FX bypass button would have been very useful; though this reveals something else about the DeepMind - effects are central to its sound. Removing the effects leaves a decent synth with its own sonic template but one that perhaps lacks the charisma of beloved analogue classics. One also wonders if it could have lowered its voice count but added more oscillator options. The other oddity is its internal fans. They are audible, though can be turned off, but with no mention of long-term consequences.

All told, DeepMind is an impressive first entry into the synth arena for Behringer. Unlike some of its previous products, this is not a cut-price clone, and has its own take on what a £1,000 analogue polyphonic synth should be. Throw in the free cross-platform editing software, massive 1,024 onboard presets and three-year warranty, and you have an alluring package.