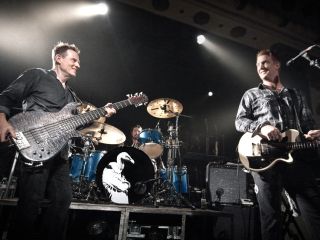 In the past few weeks, Them Crooked Vultures have been performing one-off, 'surprise' globe-hopping gigs. Come this fall, however, they've set some definite tour plans.

The rock supergroup (sorry, there's no other way to describe 'em), comprised of Dave Grohl, Josh Homme and John Paul Jones, have booked a six-gig UK tour, which starts 10 December at the Plymouth Pavillions and ends 17 December at the London HMV Hammersmith Apollo.

Here are the UK dates for Them Crooked Vultures:

Before that, however, the band is due to perform a handful of US dates (one of them Canadian), starting at Stubbs in Austin, Texas on 1 October and ending at the Electric Factory in Philadephia, Pennsylvania on 12 October.

Here are the US dates:

Short and sweet, these tours. But we're sure more extensive jaunts are to follow, especially if the band's debut album Never Deserved The Future, due 23 October, lives up to its undeniable promise.

And just to wet our appetites, Them Crooked Vultures have released another teaser clip of studio footage featuring just enough of the song Elephants (the same number they've been opening their gigs with) to get us really, really excited. This is what we in the business call a RIFF!