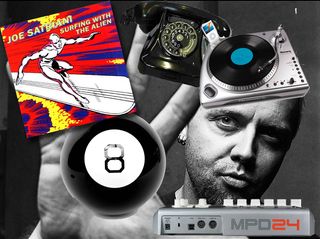 Music's biggest stars have everything, right? Well, no - maybe they don't. MusicRadar is being big-hearted this Christmas and wants to give out gifts to those superstar musicians who need some extra inspiration or technology.

MusicRadar's gifts to the stars

2008 has been a stressful year for Ringo. First came the news in July that, somewhat harshly, his childhood home was to be demolished for having 'insufficient links to The Beatles'. Then in October, he released a statement claiming that, "peace and love" notwithstanding, he intends to bin any future fanmail that he receives. By November, he was even telling fans to "fuck off". Chill out Ringo. Sit back, relax, and look at the pretty colours.

Justice were embarrassed this year when a photo found its way online that appeared to show them performing live with an Akai drum pad when it wasn't plugged in. They quickly explained that the USB cable had simply fallen out for a moment and was quickly replugged, but we'd like to buy them some of GTK's secure latching cables - just to make sure it doesn't happen again.

Back in May, the rejuvinated My Bloody Valentine's procrastinator-in-chief Kevin Shields announced the re-release of Isn't Anything and Loveless with new versions remastered from the original analogue tapes. Seven months on, both remain unre-released as Shields stalls over his homework - ie, finishing the bloody sleevenotes. A Magic 8 Ball might to help him make a bloody decision every once in a while. So Kev, how are the notes going? "Reply hazy, try again". Of course.

When Kanye West recently went off on an audience member and told him to "eat shit and die," he did so with Auto-Tune still on, making West sound like Wall-E from the hit Pixar movie. And who would be scared of a teeny-tiny robot?

So we'd like to wrap up a sweet gift for Mr West, the TVC-Deluxe Telephone Voice Changer, which I'm sure he could hook up to his wireless mic. There are multiple settings, allowing a user to sound like a complete stranger. Maybe West can disguise his voice to sound like Dr Dre. That would work.

Sometimes, a weblink is a gift enough. And as these vets of hard rockin' are currently recording under the working name of 'Chickenfoot' (which, let's face it, is poor), they need help with a raucous band name. This metal band name generator might help. Although the name Crucified By Vicar In The Cell Of Nocturnal Genocide is probably not going to be on the A-list.

Metallica's Death Magnetic is undoubtedly a mighty return to past thrash metal glories, but that didn't stop many fans complaining that it sounds better in Guitar Hero than it does on CD. Despite thousands of complaints about unpleasant digital clipping on the CD version, Lars remains unrepentant. But whether it was brick-walled at the mix or mastering stage, we reckon that we could have pumped out less ear-fatiguing final masters with judicious use of T-RackS.

The word 'prolific' doesn't do justice to Ryan's contribution to music releases. 14 albums, 10 singles and 7 EPs (for Adams, EP means 'almost an album') under various guises over 13 years. Not to mention the reams of demos seen unfit for public consumption by Universal. And after 2008's LP Cardinology? He's back in the studio! Undoubtedly, there'll be an amazing 'definitive collection' at the end of it, but until then: control yourself, please.

The formerly reclusive dubstep star had a good 2008 - his album Untrue was nominated for The Nationwide Mercury Music Prize - but as far as we know, he still doesn't have a proper sequencer (he's said in interviews that he produces all his music in Sony's Sound Forge). We'd love to hear what he could do if he had a full-on DAW at his disposal, though - Ableton's Live would suit him perfectly.

According to Rolling Stone, the President-Elect's iPod (or is it a Zune?) is overflowing with such treats as Howlin' Wolf, John Coltrane, the Stones, Dylan and, most famously, a lot of Stevie Wonder. What do you give a man with such impeccable taste? You give them the Numark TTi - the wikkid cool USB turntable that transfers vinyl straight to your iPod with no need for a computer. This way, Obama can continue to kick it old school but still pop in the earbuds whilst nestled down on Air Force One. You're welcome, Mr President!

Coldplay's Chris Martin recently responded to Joe Satriani's plagiarism lawsuit by saying that "when these things happen it's a coincidence and we're as surprised by it as anybody else." Be that as it may, we'd like to present Martin with a CD copy of Satch's breakthrough album, which is full of rockin' tunes like Satch Boogie, Ice 9 and the gorgeous ballad Always With You, Always With Me. We're not saying Chris Martin would be 'influenced' by the album in any way. We just think he'd enjoy it.

Radiohead and Prince's marketing ideals are polar opposites. Radiohead have released an album online and cultivated such a creative, willing community that the band don't even make their own videos anymore. Prince, meanwhile, expertly targets his fan base by releasing albums through right-wing tabloid The Mail On Sunday and stops fans using any and all of his intellectual property before it can even think about 'going viral' (including his cover of Creep). Perhaps Radiohead should sit Prince down and explain this thing called the 'internet' - you never know, he might get to like it.

Apparently John Lydon used to be in some punk band who were quite influential back in the seventies. Not that you'd know that, as Lydon's recent television escapades have made any memory of his work with the Sex Pistols seem like a distant dream (the latest TV spot the former Mr Rotten has lent his talents to an 'irony'-infused advert for Country Life butter). So as the point of no return has come and gone, Lydon may as well go the whole hog and join former I'm A Celebrity Get… Me Out Of Here! contestant Kerry Katona and her fictional family in the ongoing sitcom that is the Iceland adverts. It would appear that he needs the money…