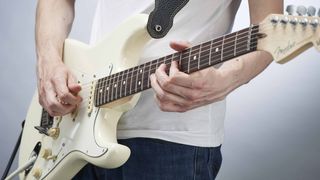 “‘Hammer-on’ is a weird term, isn’t it? I’ll stick my neck out and take a wild guess that no actual hammers are used, so what the hell does it mean?”

You’re right, of course there are no heavy tools here! A hammer-on is an expressive playing technique used by absolutely everyone who ever picked up a guitar. From Jack White to Julian Bream, Nick Drake to Nile Rodgers, there’s probably not one single player who doesn’t use this technique. Every beginner guitarist should give hammer-ons a go.

“I can’t argue with that. Tell me more about what’s actually involved then.”

Okay, start by holding down one note on the guitar fretboard using your first finger. The idea is to pick the string then play a second note by quickly pressing down at a higher fret on the same string using another finger - but no picking the string this time.

“All right, I’m getting there. It strikes me that this is harder than playing both notes with my pick though. What’s the benefit?”

Most new techniques feel difficult at first. Trust us - you’ll get the hang of it as your fingers get stronger and more used to the movements. Most guitarists eventually find hammer-ons really easy. They can even make fast passages of picked notes easier to play, but most important of all is their sound; hammer-ons have a slick, fluid sound. If you’re playing a guitar solo you’ll get a smoother vibe than you would if you picked every note.

“Can rhythm guitarists use them too? I was just wondering if hammer-ons can be used with chords.”

Sure they can! Take a look at the Am chord on the right. Instead of playing every note, leave the second string open, strum the strings, then hammer on to the second string. It’s a great way to pep up a basic chord progression.

This basic technique sounds great in rhythm guitar parts, too.

Usually in an Am chord you’d have a finger on the 1st fret. Instead, try starting without pressing down on the 1st fret, strum the chord, then hammer on with your first finger.

In bar 1, start by playing a 3rd fret note on the first string followed by a 5th fret note. The curved line joining the notes indicates that you should use a hammer-on. If there was no curved line you’d have to pick both notes. We’ve played our lick first without hammer-ons, then with, so you can hear the difference.