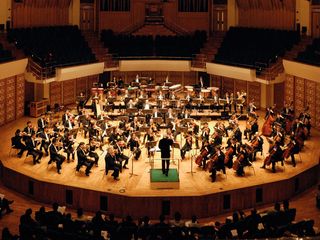 Convincing orchestral sounds can now be created in software.

It's not just movie soundtrack creators who use orchestral parts in their work - sounds of this ilk have found their way into many pop, rock, hip-hop, electronic and even rock productions over the years.

Without doubt, a touch of orchestral grandeur can have a massive effect on a song, giving it more impact and emotional weight. If you want your work to benefit from a bit of symphonic style, MusicRadar has some advice…

1. Listen carefully
Chances are that you got into making music with technology because you fell in love with the sound of a particular instrument or record. No doubt you've been listening carefully and 'like a producer' ever since, dividing records up into their constituent elements in your mind. Start doing the same when you go to the movies, by trying to separate the visual action from the music and sound effects you can hear. It's not easy…

2. Stock up on sounds
Get the tools you need. If you want to sprinkle some cropped string samples over your hip-hop project, you'll find these everywhere and anywhere. If you're intending to produce something more 'orchestral', you can get your hands on a cross-platform plug-in to suit your budget without too much trouble.

3. Work logically
Converting regular MIDI programming into something 'orchestrally convincing' needn't mean taking three years out to go and get a music degree. Think it through logically: assign pads and harmonic parts to sustaining instruments like horns and strings, and melodic parts to melodic instruments such as flutes, clarinets and trumpets, for example. Then you need to start considering articulations and dynamics.

4. Mix things up
If mainstream pop isn't your thing but 'real' instruments appeal, the choice of unusual, organic sounds and treatments is positively infinite. Listen to what Björk has done with harpsichords, hand drums and brass bands, for example, focusing in particular on how she blends these instruments with samples and twisted electronics. Go after something similarly unique of your own.

5. Think outside the box
If you're working as a producer and you want to add weight, depth and/or spice to your tracks, rather than heading into your plug-in library looking for yet another synth sound, why not turn to an unusual 'real' instrument sample instead? When was the last time you heard a clarinet solo in a pop record? Get there first with unusual arrangements and perhaps you can create a 'why didn't I think of that?' moment, like the Bollywood string sample on Britney Spears' hit, Toxic.

6. Don't overdo it
If you're looking to make the most convincing, realistic orchestral sounds possible, take time to consider the ensemble size for the piece you're composing. It's easy to slip into the mindset of 'the bigger, the better', but smaller, more intimate instrument groups often achieve more powerful results.

8. Creating depth
Don't just let your samples arrange themselves in the mix; think it through. If you're using a single string section patch, set it up four times, copy the part to four MIDI channels and thin each one out, so that one instrument group resides on each channel, before panning them individually. Think about the spatial depth you're after, too, and set up appropriate reverbs to create it.

9. Avoid musical clichés
Try to compose in an unusual, engaging and individual style. Heaven knows, you'll be occasionally forced to write clichéd, pastiche-laden work when you start receiving commissions to write to picture. In the meantime, explore what instruments can sound like in all of their varied glory, either by pushing your samples to their limits or, better still, trying to find solo players who'll come and bow, blow and hit stuff all over your fledgling musical pieces. There's a whole world of unused, interesting sounds out there, irrespective of your budget, software and location. Go explore!