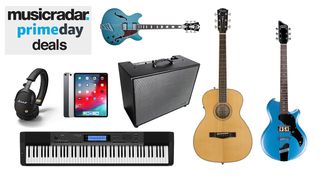 Prime Day 2019: We've spent the last 24 hours scouring the web for the very best Prime Day deals for musicians. If you don't have time to read our full list we've rounded up the best music deals online right here.

Whether you're in the market for a new electric guitar, acoustic guitar or guitar amp, a keyboard, some headphones or maybe a new iPad for music making on the go, you'll find the best deals below.

D'Angelico electric and acoustic guitars
Get 30% off 106 models at Amazon
Could this be the best Amazon Prime Day deal this year? Get massive discounts off a colossal range of electric, acoustic and bass guitars now!View Deal

Fender’s PM-TE travel acoustic guitar
$369. Save $330 at Musician's Friend
An almighty 47% discount makes this one of the very best acoustic guitar deals this year. Fender's top-spec travel guitar boasts a solid Sitka spruce top and solid mahogany back and sides, plus a Fender/Fishman-designed preamp - and hardcase!View Deal

Line 6 Firehawk 1500 stereo guitar combo amp
Was $999, now $799 at Musician’s Friend
This six-speaker stereo amp is designed to perfectly replicate its vast array of onboard effects, which can be controlled via Bluetooth. And at $799, it makes a nicely priced one-stop guitar tone shop.View Deal

Egnater Tweaker 112 15W tube guitar combo
Only $499 at Musician’s Friend
One of the most versatile 1x12 tube combos on the market, the Tweaker boasts five toggle switches to change the amp’s character, spanning sparkly cleans to high-gain rock. Plus, there’s $100 off!View Deal

Learn to play guitar for less with Fender Play
50% off at Fender.com
The Fender Play learning platform is one of the easiest and most affordable ways to learn to play guitar - and it just got even cheaper: you can now get 50% off an annual plan, which brings the monthly price down to just $4.99/£4.79.View Deal

Marshall Monitor Headphones: was $249, now $129.99
Yes, they're bluetooth, and yes, they'll give you 30 hours of playtime before you need to recharge, but the main reason to buy these is because you'll look like you have a couple of Marshall stacks clamped to your skull, and that's priceless. View Deal

Led Zeppelin – Coda Super Deluxe Edition
Was £108.54, now £69.56
Zep's last album gets a bad reputation but this super deluxe box really did unearth some extras. 3 CDs, 3 vinyl records, an art print and a book. Get it while you can.View Deal

Amazon Echo Plus (2nd Gen) + 6mo Amazon Music Unlimited
Was $197.93. Now just $109.99. The king of Echo devices enables you to enjoy powerful, 360-degree sound thanks to a downward-firing 3-inch subwoofer and an upward-firing 0.8-inch tweeter.View Deal

Supro Jamesport electric guitar: was $899, now $519
This retro-vibed single-pickup number is one of the highlights of Supro’s mammoth guitar range, boasting a Gold Foil designed to capture those classic blues-rock vibes.View Deal