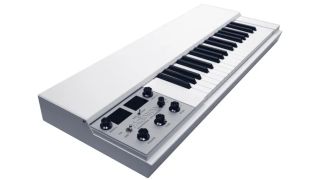 It would seem that whenever a Mellotron comes up in conversation, a history lesson ensues. The experienced keyboard aficionado knows the legend, yet for the newcomers, there is continued fascination with the instrument.

To describe how the instrument works is to tell a steampunk tale of a keyboard that played analogue tapes of sounds it sought to emulate. The classic recordings of the 1960s and 1970s (think late-era Beatles and early progressive rock)continue to inspire and lead musicians to discover the sounds, which to this day still ooze personality—and have been described in print a record number of times as “haunting.” Under the direction of Markus Resch, Sweden’s Mellotron company still produces tape-based instruments (the Mk. VI and Mk. VII) and brought the ’Tron into the digital era with the M4000D. That instrument provided faithful, 24-bit samples of many classic Mellotron (and related Chamberlin) sounds in a portable package. They’ve trimmed some physical features and made a more affordable option in the M4000D mini, which we’ll discuss here. Let’s see how the experience stacks up with its sibling instruments.

Visually, the Mini takes cues from the classic M400 (as do the modern Mark VI and 4000D). It sports a white metal case with a 37-note Fatar keyboard action with touch-sensitive, plastic keys(no aftertouch). The bigger M4000D uses a wood casing and also a true Mellotron-style wooden keyboard action that even has polyphonic aftertouch. Like its bigger brother, the Mini’s flat top surface can hold a few items or even a small keyboard—and in fact, the Mini is sized to sit perfectly atop its bigger brother. It’s the most lightweight instrument to carry the Mellotron name, at 21 pounds.. Like the M4000D, the control panel is graced with classic knobs, toggle switches, and lovely backlit labelling, plus two colour LCD screens. The back panel shows that the Mini has most of the connectivity found in the larger M4000D, but no XLR audio outputs. MIDI is handled by five-pin in/out/thru ports, but there’s no USB connectivity. Now that’s old-school!

Like the M4000D, the Mini comes loaded with 100 sounds, drawn from various Mellotron and Chamberlin instrument models. It’s bi-timbral, and there are always two active sound slots, A and B, with sounds loaded and ready to play. Each slot has its own screen, displaying a graphic of the particular model whose library the sound originated. You can use the Mix knob to blend the sounds in slots A and B. Press the Select B knob for a convenient list view of the presets, and press it again to enter a custom playlist mode to assign and access your favourite sounds. The presets include Mellotron classics like strings, woodwinds, vibraphone, brass, mandolin, and other keyboards and percussion. Our review unit came with an expansion sound card that adds 100 more sounds (available separately for $500). The card is called “Sound Card 02”, as “Sound Card 01” refers to the preset sounds permanently installed in each unit. The card contains many of the fun “auto-accompaniment” sounds from the classic libraries (old-timey foxtrot and cha-cha, anyone?), as well as some newly-released master tapes, containing vintage libraries custom-recorded for artists such as Yes, Roxy Music, Genesis, Jack Bruce, and Tangerine Dream (there are also some sounds labelled as “BSabbath” (though I couldn’t help but notice that the full name of the band is left out of all printed materials). No matter, because these libraries are remarkably cool. Some sounds are quite specific (I detected some “samples” of excerpts from Fish Out of Water, the rare solo album by Chris Squire of Yes), and if you’re a fan of the aforementioned artists, it’s a rewarding experience to get an insight to the experimental spirit and creativity that they employed with what was cutting-edge technology years ago. Many of these sounds have also been made available for Nord instruments, but only the M4000D and Mini have them at full 24-bit uncompressed audio fidelity.

Under the hood, the Mini functions nearly the same as the M4000D; these sounds are faithfully recorded with one sample per key, and, like the original, each has a duration of about eight seconds with no looping. The sounds remain sustained if you change presets while holding down a key, which is great for live performance. You can choose to have some amount of velocity sensitivity to volume, but there is no aftertouch to lean on here. A horizontal toggle switch in the middle of the panel drops the sound an octave lower when you shift from “high” to “low.” Another nifty feature is that you can choose subtle EQ characters for the instrument globally: opt for a cleaner, clearer output (“Chamberlin M1”) or a slightly muted vintage character with “Worn Tapes” (Mellotron M400). One aspect that was unexpected is the nature in which the Mini and 4000D deal with the sounds on the Memory Card. Unlike other synthesizers that show expansion sounds in their own banks, the Mini treats the sounds on the card like they’re a part of the overall bank. You can organize the sounds alphabetically or by category, but it’s not apparent which sounds are on the card and which reside in internal memory. So take note.

The Mellotron company has always worked as a sound library developer because the user had to send in any sounds that he or she wanted to use in the Mellotron. This was one of the main reasons why they became so devoted to acquiring and preserving all of the Mellotron master tapes, starting around 1990. The tapes had been spread all over the world, and it remains an ongoing task to preserve them and convert them to digital format. The original recordings are on different formats, most on full or two-track 1/4" tape, some on 16 track 2" tape. Therefore there’s a vast library of custom recordings. Some of the original recordings were included on the first expansion card, and you can find a full list of sounds on the company’s homepage.

It works the same way in the digital realm because Mellotron uses a proprietary file format to ensure the highest possible audio quality. Artists like Rami Jaffee of the Foo Fighters and Patrick Sansone of Wilco have provided custom recordings in recent years. With their permission, some of their sounds are included on the first expansion card, Sound Card 02 (Sound Card 01 is built into the M4000D and M4000D Mini). One of the accordion drone sounds in one of Rami Jaffee’s sounds was recorded by Nirvana bassist Krist Novoselic.

The rear panel sports three 1/4" line-level audio outputs: A, B, and Master. Note that while the samples are monaural, you have the ability to assign each of the two live sound layers to either “A” or “B” output, should you desire to process or mix the sounds separately. The “Master” is the main mono output that will reflect the balance of the two tones you set from the front panel. There’s a stereo 1/4" headphone jack, inputs for sustain and 2 expression pedals, and the aforementioned MIDI in/out/thru ports. Like the M4000D, there are some quirks. For instance, the volume pedal jack is meant for an audio volume pedal such as an Ernie Ball Jr.—you’d plug the TRS end of a send-and-return Y cable into it, then either end of the Y into the pedal’s input and output, respectively. However, the “Expr. 1” jack can control the A/B tone mix or the pitch using a standard MIDI expression pedal. Both can accept switch pedals to increment or decrement through a playlist (pairs of sounds you can choose for quick access), if you modify the pedal by rewiring it to a TRS plug. Soldering? Now that’s really vintage.

Having previously worked with the M4000D and a vintage M400, I maintain that one of the special aspects of the instruments is inspiration; there’s something about the combination of sounds that evokes realism—call it recordings of real people expressively instruments—while the mechanical limitations cause unexpected effects that give it a signature charm. The M4000D and Mini surely come as close as one can get to the vintage treasure, and in many ways add much-needed conveniences like portability, low maintenance, and instant access to up to 200 classic sounds (and live layering of any two).

Even at the lower price point than it’s big brother, the M4000D Mini is still a $2,000 boutique instrument. There are lower-cost sample-playback instruments that have user memory, more keys, effects, and modern keyboard-player features. One could also look at a Nord Electro, which has a large free library of official Mellotron sounds (reportedly using lossless compression), plus highly-rated organ and piano sounds, and hovers in the similar price range. However, there is something direct and elegant about a dedicated instrument like the M4000D Mini. For those with a passion for classic sounds and classic styling, the Mini will not disappoint.

Cons
Keys are not aftertouch-sensitive. Still could be considered pricey. Modified foot controllers required for some control features.

Bottom line
The Mellotron experience now comes with a lower barrier to entry in the form of the M4000D Mini, the most affordable and digital instrument to capture the throwback glory of its tape-based ancestors.