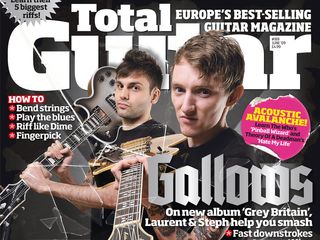 Watford punks Gallows pulled no punches when they went into the studio to record their incendiary new album 'Grey Britain,' using up to 25 amps per track to capture the biggest sound possible.

As guitarists in Britain's hottest new band, Steph Carter and Laurent Barnard reveal all in the new issue of Total Guitar, in stores 20 May.

"At one point we had 25 guitar heads in the studio," says Steph. "I brought my entire guitar collection along. I brought all of my Marshall amps down, my Mesa, we had Orange - there were six different Marshall's including a 59 SLP, a Plexi and a 2000. We ran four to six heads for each guitar tone on the album."

Steph and Laurent also reveal how they used the raw vintage tones of early Black Sabbath albums as the benchmark for their guitar sound on Grey Britain.

"Sabbath's early stuff is great," says Laurent, "You can hear every intricate part of the guitars. It sounds live, it sounds real. We used loads of vintage amps to get that Sabbath sound."

Total Guitar even fixed it so Steph and Laurent could meet their idol Tony Iommi and the new issue features what went down in a London hotel room the day they did!