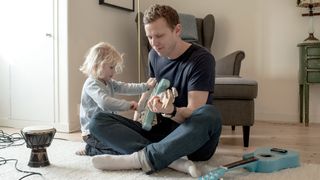 Father's Day 2019 is on 16 June, and as your dad is a music-maker (or you're a music-making dad who needs to drop hints), we've pulled together this go-to list of gifts that he (or you) would actually want.

A last-minute home-made Father's Day card and a hastily cobbled-together breakfast in bed are nice, of course, but not that nice, and one man can only use so many cordless drills and comedy mugs.

With that in mind, here are 17 of the best Father's Day gift ideas for guitarists, DJs, drummers and synth-heads this year.

This nano-sized pedal sports the usual Big Muff triumvirate of Volume, Tone and Sustain knobs, but also includes a switch that bypasses the Tone knob.

Compared with what you might get from a typical transistor-based Big Muff, there’s a little more coarseness to the sound, an underlying grainy crunch that lends itself to grungy riffing and thick ’n’ heavy chord work.

In between the extremes there are sweet spots where you use the tone knob to dial in the right amount of edgy presence, or instead go straight to a no-nonsense sound that cuts through the mix by flicking the Tone Bypass.

Those specifically seeking the famous Smashing Pumpkins tone will find it here, in a reasonably priced compact pedal from the original manufacturer.

New guitars come with a plastic baggie full of allen keys, which you use once before you misplace the small one that adjusts the saddles, leaving you lost every time you need to adjust your action.

Enter D’Addario’s Multi-Tool, which boasts 10 tools ready to sort your guitar out good and proper. It spans US and metric-sized keys made of heat-treated S2 steel, and the whole lot folds up into a small form factor.

Three fractional hex keys, four metric hex keys, two Phillips screwdrivers and one slotted screwdriver add up to one seriously handy gadget to have in your gigbag.

This new take on an old favourite gives the beloved Tortex series a bevelled-edge makeover. Sharp edges and a wide angle provide the gliding movement that made Dunlop’s existing Flow picks a hit with shredders such as Andy James and John Petrucci, but here they’re paired with the traditional Tortex material for an altogether snappier response. They’re available in gauges from .50mm to 1.5mm.

Desktop mini-amps are a great practice tool for those players facing limitations on space, budget or volume.

In recent years they’ve evolved well beyond the ‘bee in the tin can’ tone of the earliest examples and offer punch well above their weight and price point.

The two-channel Mini-Laneys make a great gift - even offering you get a choice of stereo or mono options, emulating Laney’s Ironheart, Supergroup and Lionheart designs.

Warwick’s quest to redefine the pedalboard market continues apace, and the nicely priced RockBoard could make the perfect present for the pedal lover in your life.

Promising a “lightweight, rigid and rugged” format, the new RockBoards are constructed from one folded, cold-rolled aluminium sheet, meaning they will neither “bend nor wiggle”, apparently.

The ’boards’ slot-based design works with standard mounting solutions such as Velcro, as well as RockBoard’s own Quick Mount pedal mounting plates, available separately. Power supplies can also be mounted underneath using RockBoard’s The Tray mount, while Module patch bay can be connected, too, offering easy access to ins and outs.

Besides boasting one of our favourite product names in recent memory, the original Rimpitch was a nifty little tuner that slotted into an acoustic’s soundhole.

Its successor is fully chromatic, so supports alternate tunings, as well as reference pitches from 438 to 445Hz.

Otherwise, the design is much the same, with a rubber-cushioned chassis that mounts on to 100mm-diameter soundholes, and uses a piezo pickup to detect pitch. Tuning precision is +/- 1 cent, while battery life is 36 hours.

Fender's range of Jimi Hendrix Voodoo Child cables is produced in partnership with Authentic Hendrix, and available in three colours (purple, white and black), the Coiled Cables are recreations of the leads Hendrix used back in the day, but built using modern specs.

So while the end pin plugs, vintage-style pancake ends and oversized barrel are faithful to the original, up-to-date, 95 per cent shielded braiding aims to reduce noise, while a 30ft length makes for increased movement. Groovy.

The amp manufacturer has managed to find yet another venture to which it can lend its storied branding: beer.

Yes, Marshall has partnered with William Bros Brewing Co to produce three craft beers “designed specially to be enjoyed with music”. The three brews are Amped Up Lager (4.6%), Full Stack IPA (6.8%) and Jim’s Treble (8.6% triple blonde), all of which boast Marshall’s “signature attitude”, with the latter packing “as much character and inspiration as the iconic Jim Marshall”. Blimey.

Available in the UK from Williams Bros Brewing Co.

Gifts for DJs, synthheads and producers

As if Nintendo’s Switch wasn’t fun enough already, its Labo kits bring the experience back into the real world, providing the materials and the know-how to build cardboard creations that can turn the console into something completely different.

The Labo ‘Variety Kit’ has you building a fishing rod, a house, a remote-controlled car, a motorbike and – importantly for us – a piano: a one-octave cardboard musical control device replete with knobs and levers to change the sound.

When built, the piano gives you a resting place to insert the console, which runs software that creates and records the sound itself. The 13 keys play notes, as you’d imagine, with the lever on the side changing the octave; three dials each have their own effect on the sound and can be turned to fine-tune it; you even get actual cardboard waveforms to insert to change the oscillator’s tone.

If you’re a professional musician of any sort, your ears are something you should take very seriously. Not only are musicians likely to be exposed to loud environments, but any significant hearing damage will have an immediate impact on your ability to do your job.

Vibes earplugs offer protection in loud environments, but they claim to go further than the cheap and cheerful generic foam earplugs, isolating the entire frequency range as equally as possible - just watch out for the linear-scale frequency chart in their marketing materials, though.

Vibes comes complete with three sizes of earplug, and both a hard case and a bag for keeping them together.

KO! and Speak are the eight and ninth additions to Teenage Engineering’s Pocket Operator range, joining last year’s PO-32 Tonic to complete the ‘metal’ series, the unifying characteristic of which is the addition of a small mic to the top of each unit.

While the first two batches of POs were effectively sound players - pre-loaded with samples of synth tones - this latest trio use the upgraded hardware to add an extra layer of flexibility to the PO formula.

While, despite their limitations, all the POs are fun noise generators and great for inspiring incidental sounds, Speak is probably the most useful Pocket Operator we’ve seen so far. Its ability to sample, trim and process vocal sounds make it a great little tool for creating little one shots and vocal hooks - we can see users creating whole tracks based around the effects it creates.

littleBits has garnered praise for its modular approach to learning electronics, with a diverse array of components that can be combined to make everything from alarms and lights to games and bionic forearms. But it’s this year’s music-oriented littleBits beginner pack that’s got us especially excited about the platform.

The classic studio headphone design hits the Bluetooth trail, offering 40 hours of battery life for in the studio, at home or anywhere else.

There’s not much to be said about Audio Technica’s closed-back M50 range that hasn’t already been said, spread and verified time and time again by countless users since this model’s first outing in 2007.

The ATH-M50x saw these classic cans updated in 2014, increasing the size of the speaker driver for a higher-quality result. The addition of wireless functionality with the Bluetooth 5.0 protocol, though, should prove a draw to anyone who wants to roam free… or at least as free as your connected sound source will let you.

Always losing, lending or misplacing your audio jack converters? Do yourself a favour and sort the problem out once and for all. If you’re completely unsure what to ask for from family or friends, stock up on 1/4-inch-to-3.5mm jack converters, audio cable extenders and splitters, and you’ll never be caught short again. That or you’ll become known as 'that person who’s always got a jack converter to borrow.'

Stocking up on the little things in life is a great (if slightly boring) strategy for everyone - guitarists could grab a few years’ worth of plectrums, and writers can make sure they’ve got enough pens to last through a nuclear holocaust.

Meinl’s Benny Greb-designed Cymbal Tuners offer a way to get more sounds out of your cymbal setup, without having to use tape or gels to do so.

These magnets are placed on your cymbals to alter their sustain and volume. Each set comes with two ‘large’ and two ‘small’ magnets for you to experiment with, as well as a metal tube to keep them in. They work wonders on over-excited cowbells, too!

Who says drumheads have to be clear or coated white? Not Remo, with the introduction of its Colortone heads earlier this year you’ve got a simple way to add character and a splash of colour to any kit, but especially acrylic.

Very much the gift that keeps on giving, a subscription to one of our sister magazines will ensure that your beloved father is kept abreast of everything that’s going on in the world of guitars or music tech for an entire year.

You can choose from print, digital or print-plus-digital options to get world leading mags like Guitarist, Guitar World, Future Music and more, and we ship to more than 100 countries.

If you think any of our titles will make the perfect gift, then a) you are correct so b) head on over to our MyFavouriteMagazines subs page.