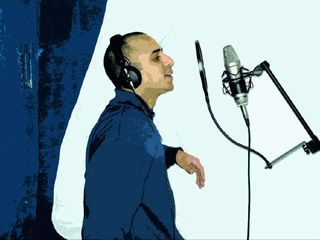 Getting your singer to stand at the correct distance from the mic is key to a good vocal take.

While drum recording techniques are all about context and adaptation, vocal recording is almost always the opposite. There's a huge amount of creativity and personality brought to bear on drum takes, but the vast majority of the sonic expertise that goes into producing a great vocal track is applied after the fact (except for the performance itself, of course), and so the key, especially for the beginner, should be to get the absolutely cleanest, clearest and best vocal recordings you possibly can.

Bright and live sounding rooms might be fabulous for evocative strings and stadium drums, but for vocals they're usually just a mix-muddying inconvenience. One of the first effects an engineer or producer is likely to place on a recorded vocal is a compressor, which will instantly increase the detrimental effect of any excessive room brightness. Next they will, most likely, apply reverb, which will further exacerbate the problem. It's hard to quantify exactly what the issue is, but it's largely to do with clarity. Because strings are quite resonant with extended envelopes anyway, natural reverberation adds to their character. At the opposite end of the spectrum, percussion has very fast attacks and short release times, so a little natural reverb simply smooths the transitions between transients. But with neither sharp transients nor extended release times, the human voice occupies a curious middle ground. It sounds unnatural and dead with no reverb, but too much and the minute sonic repetitions will blur the edges of the intricate sounds and formulations that our voices make. With this in mind, the wet-dry balance and the character of the reverb itself become critical with vocal recordings, so it's usually far safer to get the driest signal upfront and add effects later.

In terms of mic placement, there are a number of different techniques that can be used, but in the end you need to base it on your singer. If they play live, they'll have a tendency to creep towards the mic, even if you staple their feet to the floor - but you actually want them about 20-60cm away, as this is the ideal distance to let the sound of a voice develop. If you find your singer's voice too boomy, move them further from the mic to smooth things over. If their voice is thin and lacking presence, stand them closer. Ideally, if your singer is old-school, they will have learned to move in close at quiet spots and pull away for louder sections. If not, you can balance differences with compression later, but nothing beats the effect of a vocalist who really knows their stuff.

The only other real deviation is if you're having problems with plosives (the little pops of air pressure caused by saying words like 'popping'), in which case you may want to try a pop-shield (always worth it to stop singers spitting on your precious mics anyway!). This problem is more prevalent with condensers, owing to their greater sensitivity, but it's also largely to do with the vocalist. If you are still having problems, try placing the microphone slightly to the side of the singer.

If you do choose to move the mic to the side, it may be helpful psychologically if you give the singer something to sing at (a dummy mic, for example) to stop them automatically turning towards the real one.

The joint first most important trick for getting great vocals is pretty simple really: make sure you get a good performance. This means good people management. If your vocalist is prone to getting wasted before a session, stop them. They might be one of the 0.05% of singers who sound better that way, but it's unlikely. You also want to avoid tired, hungry and angry singers, as all of these things will damage a performance.

Make sure your vocalist warms up. You wouldn't race a Formula One car without doing the warm-up lap, would you?

Quality is everything with vocals, so make sure you're using your absolutely best microphone - ideally a cardioid condenser on a well placed and secure stand.