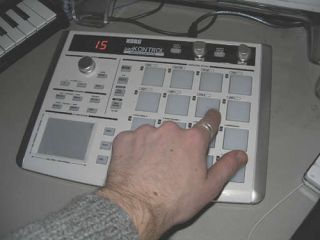 Get a drum pad and your recorded beats will sound much more realistic.

Good drum production boils down to having the right sounds, the right patterns and the right processing - it´s no more difficult than that. However, getting these three pieces of the jigsaw to fall into place can be a challenge, which is why MusicRadar has put together this handy guide. Whether you record live drums or program your beats, this advice will be highly relevant…

1. Once you know what to listen for, phasing is painfully obvious, but if you´re not sure, try muting and unmuting the drum channels in turn and in pairs - particularly the overheads. If there is phasing, you´ll immediately hear a big qualitative difference and so know which tracks to fix.

2. Mic placement is everything in recording, and the only way to get it right is to don the headphones, get down on your hands and knees and move the mics until you get the best sound you can. Don´t stop until you get it spot on, as while you can improve a bad recording, you can´t entirely fix it!

3. Headphone bleed can be a bit of a problem for drummers, as they tend to need their backing tracks pretty loud. A good pair of noise-isolating ´phones is indispensable - Sennheiser´s HD25-1s or HD25 SPs, for example. A cheaper option is to use ear-bud headphones with a set of industrial ear defenders over the top.

4. If your passion is for drumming and not engineering, but you still want a great sound, check out one of the excellent electronic MIDI drum kits available from Roland, Yamaha and others. These come with astonishingly realistic sounds and can also be used to create MIDI parts to play back through the drum sample library of your choice.

1. The best way to create cutting-edge, authentic-sounding drum parts is to start out by mimicking your favourite tracks. Import one and chop the beats up, either manually or with a beat-slicing tool, then slow the loop down to analyse it and see what´s really going on. You´ll be amazed at how just one drum hit in an unexpected (and not rigidly quantised) place can transform a groove from the mundane into something special.

2. Use the drum pads on a dedicated MPC-style drum pad controller to play back chopped up loops or even synth patches for a more percussive approach to jamming. You´ll come up with edits and riffs you simply wouldn´t get any other way, leading to everything from choppy hip-hop grooves to J T Vanelli-style jacking house sounds.

3. Whenever you come up with a particularly good drum fill, edit or skip, save that part out as a MIDI file for use in later tracks. No, it´s not cheating - it´s just common sense. We´re not saying you should use them all on every track and never do anything new, but if something´s worth doing once, or works exceptionally well, it´s got to be worth trying again. It might even end up becoming your rhythmic trademark.

“The best way to create cutting-edge, authentic-sounding drum parts is to start out by mimicking your favourite tracks.”

1. Try to avoid wasting too many stereo channels on drum tracks (kicks should almost always be mono). Some hats and snares will sound good with stereo effects placed on them, but these will often just stop them cutting through - go for a balance. Panning is a far more useful way to get exciting stereo drums, particularly with real ones.

2. If you have loads of real drum channels recorded, you´ll inevitably get some crosstalk between them. One way to reduce the clutter is to filter out unneeded parts from each. For example, if you have toms and kick on their own channels, you don´t need any bass frequencies on the overheads or snare mic. Trim as much as you can without losing the feel. You can also gate the toms so that unless they´re played, their channels stay silent. Or, if there´s not too much tom action in the song, you could manually automate the volume to silence the parts where they´re not played.

3. Sometimes, drum kits just don´t gel together, particularly when you´re going for that sampled breakbeat feel, and this is equally true for recorded or programmed breaks. To bring everything together, try grouping all of your drums on one bus, then applying some kind of analogue-style limiting and EQ, just as they would´ve back in the day.

1. There´s an old production adage that it´s not what you put in but what you take out that makes the difference, and this is never more true than in hip-hop production. Resist the temptation to keep adding parts, and make sure you leave plenty of room for the parts to breathe (some hip-hop beats only have one or two kicks per bar).

2. There are two styles of hip-hop drums - sampled and synthesized, but even if you´re a staunchly traditional samplist, layer your sampled kick with a synthetic one (try the kick drum from an 808 kit). Do this using a separate channel or by layering both samples in your sampler so that they share the channel´s processing.

3. Some hip-hop tracks don´t even have a kick at all. If you´ve ever heard Snoop Dogg´s Drop It Like It´s Hot you´ll know that toms alone will sometimes do the trick.

“There´s an old production adage that it´s not what you put in but what you take out that makes the difference, and this is never more true than in hip-hop production.”

1. Modern house beats comprise a combination of synthetic and natural sounds, so make sure you strike a good balance between the two. They do tend to be quite tight, even when funky quantisation is applied, so try to edit each carefully to remove unwanted pumping sounds and tails, and be sure to experiment with different note lengths.

2. Most styles of modern dance music rely heavily on reversed sounds as part of the actual beat. These can be a bit tricky to program (another reason why manual playing is cool), but the first step is to chop off a big chunk from the start of your reversed sound to make it short and punchy - ideally by moving the start point so that you can tweak it in place.

3. Compression isn´t the only way to get your drums snapping and pumping as you´d like. Amplitude envelopes can really help here - you can make the tail quieter for increased punch, or bring it up for a ‘roomier´ sound. Get experimenting!

1. One of the interesting things about real bands is that everyone generally plays slightly behind the drummer, taking their cues from and reacting to the drums. To recreate this feel with programmed drums, try nudging them forward along the timeline a tiny bit (a few milliseconds´ worth), or the other parts a tiny bit back…

2. Real drum parts generally have a lot more in the way of grace notes and fills than programmed beats, so factor this in when arranging them. The only really reliable way to achieve these nuances in the first place is to play them in by hand, ideally on a drum pad.

3. If you don´t have any ambience mics for your drum kit you can recreate their effect using a realistic reverb (convolution reverbs are ideal) on an ‘ambience´ setting. For other styles, use whatever you like, depending on the sound you want. Plate and spring reverb sounds 60s/70s; digital reverb sounds 80s; and convolution is clean and modern.

1. The more reverb you add to drums, the messier they become, so don´t go crazy. You can even use the classic 80s gated reverb trick, but if you don´t want to sound laughably retro, try using the hold setting and/or a long release time and tweaking it so that the reverb tail doesn´t disappear instantly when it drops below the threshold.

2. Layer, layer, layer. In most programmed styles of music, it helps to layer a variety of drum samples (either by doubling up the parts on different channels or layering samples in your sampler patch). Many of the really good drum sounds you sample off other records will be good precisely because they´re layered.

3. Kicks and snares require punch so compress, compress, compress. The way to achieve that distinctive crack is to set your attack time to 3-6ms, allowing the sharp transient through before the signal gets attenuated. Then, raising the ratio and lowering the threshold will further accentuate the crack in relation to the rest of the kick.

4. Most of your drum sounds will benefit from some EQ, and if you´re struggling to make one of them cut through, adding some kind of high frequency boost or an exciter can work well. Just be aware of the standard EQing technique of cutting unneeded and clashing frequencies from other drums before boosting.