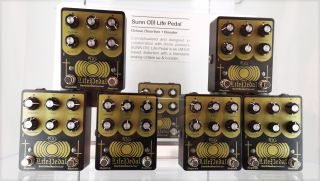 NAMM 2020: The effects section of NAMM is a deafening roar of sound and smorgasbord of colourful and creative stompbox designs. Some visitors never truly return from the experience and picking through the highlights requires discipline. But we've done it and here they are… beware, some of them are out there even by NAMM standards.

Unexpectedly, Neural has entered the increasingly fierce modelling and effects unit arena and they have quite a fighter here.

Moving from plugin prowess collaborating with Darkglass and artists including Plini, the Finnish team brought its first piece of hardware to the show. It had two demo units and there was quite a buzz around them.

These also run the firm's biomimetic "Neural Capture" tech and this is when it gets really interesting; it mimics the way the human ear perceives sound to deliver "the most comprehensive and detailed detection system, and the most accurate and powerful digitised rigs on the market."

We were very impressed by what we heard and If they can deliver on the claims elsewhere this year, the $1599/€1599 unit could be one to beat.

What does being the world's first ever ‘optical spring reverb’ actually mean? The best of the old and new it seems;  a traditional analogue reverb tank in the Light pedal is fitted infra-red optical sensors in order to “to harvest the full timbral and harmonic range of a spring reverb tank.”

According to Gamechanger Audio, in more traditional spring reverb designs much of the audio signal’s harmonic details are lost in the process of converting the audio into mechanical energy.

Gamechanger places its sensitive optical pairs at specific places on the spring, and claims it is able to capture a wider range of frequencies, harmonics, overtones and textures in tour sound as a result.

And of course it looks very cool too…

Like the Latvian's Plasma Pedal and Motor Synth there's some visual panache going on here as you'll see in the video when the visible reverb tank lights up. But it also sounds as good as it looks on first impressions.

The detailed overtones we heard went much further than the standard spring reverbs we'd encounter. There are plenty of controls on the front panel for shaping your sound too and a mode dial that can switch between effect types to capture sounds including tremolo, modulated reverb and harmonic shimmer.

We can't wait to spend some quality time with this one.

The Nobels ODR-1 overdrive is a firm favourite with players who are overdrive conosaiers, and can often be found on the 'boards of session guitarists who need its wide range and sensitivity to their guitars' volume controls. Now it's improved.

The German brand have added an internal Bass Cut switch under the pedal's battery cover to offer added control over your low end.

There's also an internal power circuitry upgrade to allow for 9-18 V capability and allow extra headroom, if you want it. Quite a deal for £99 / approx $129.

There's almost too many options for great reverb pedals now. How do you choose? Earthquaker Devices are only adding to the dilemma here for experimentalists with a great pedal beloved by players including Chelsea Wolfe…  but improved again.

A POD?! Hang on, aren't we in the Helix era now? We have to admit, it's a puzzling branding move on paper but perhaps it would have added too much confusion to the existing four-unit Helix line.

Nevertheless the specs and form factor impress and might be the Line 6 unit some players have been holding out for.

A user-friendly LCD screen with colour coded patch displays reflects the the eight footswitches and keeps things nice and clear for players. And under the hood there's the same modelling power as the Helix.

Other features include five push encoder knobs and an expression pedal and connectivity to cover you live and as an 24-bit/96kHz audio interface too.

Paul Cochrane's fabled low gain Timmy overdrive can be a tricky one to track down new on the market, so the news MXR have partnered to create a smaller version at $130 is welcome news indeed.

Read more: MXR has made a Timmy mini overdrive pedal with Paul Cochrane

Apart from the amazing detail of placing a 'Bee Bee King' on the circuit board inside the Fatbee's casing, there's more good news here.

The Fatbee Overdrive is the first in Beetronics' new, more affordable Babee series (price TBC) that will feature smaller footprints.

The pedal uses  JFET transistors to create tube-esque character and the pedal encourages breakup control via the player's guitar volume control. And, as ever, Beetronics embraces its theme with the controls here; Weight (master volume), Flavor (tone) and Honey (gain).

Read more: Tone makers - Beetronics’ Filipe Pampuri: “Don’t let things get in the way of your playing - keep it simple”

Three new Danelectro pedals at once? Well it's NAMM so why not! There's quantity and quality here too with the boutique circuits on offer.

The 3699 Fuzz is a comeback of sorts – Danelectro's French Toast reborn, itself based on the Foxx Tone Machine. Danelectro's president Steve Ridinger was actually the man behind that and the new fuzz promises warmer octave fuzz fun with switchable mid boost.

Dano's Back Talk is a reissue of its own reverse delay, while the Roebuck is the company's take on the Ibanez MT10 MOSFET distortion.

The 3699 Fuzz, Back Talk Reverse Delay and Roebuck Distortion are all based on classic designs: the Foxx Tone Machine (previously seen under the Dano badge as the French Toast); Dano’s own revered Back Talk; and the Ibanez MT10 MOSFET Distortion, respectively.

Finally, something for acoustic players! Though this is less an effect and more a basis for your whole plugged in sound.

The Soundscape captures its own version of an impulse response of your acoustic guitar through the Acoustic Live smartphone app, and via the wonders of its algorithm it then translates that to the pedal itself. This can then be blended as desired with EQ tone shaping.

We only tried it through headphones at the show and that's really no way to judge acoustic tone so we're looking forward to testing this ourselves for a MusicRadar review.

Read more: Is LR Baggs about to change the game for acoustic guitar tone with Soundscape?

Assembling your own overdrive pedal sounds like tonehound Lego and so it proved when we had a go ourselves on a solderless kit, as you can see below. Korg claimed it can be in done in 45 minutes, and that may actually be an overestimate for some – especially after we made a small error with a battery cable and had to backtrack a few steps.

That's our excuse for GuitarWorld.com beating us anyway.

Read more: With Korg’s Nu:Tekt OD-S kit, anyone can build their own overdrive pedal

A pedal you pour your beer into? Ok, this is an odd one even for NAMM. We'll let the video explain Rainger's brilliantly leftfield idea…

Ibanez had a very busy NAMM, away from the guitar action they had three new effects to showcase. Well, two are technically old cult favourites…

The Flanger Mini is the latest edition in the company's downsized series and it's clerly inspired by the Ibanez FL9 from the eighties. Its width control is now called depth, alongside speed and regen knobs.

The Tremolo Mini seems to be a fresh take with wave, depth and speed controls. The pedal also includes an internal level trimpot that helps to prevent volume loss that can occur with tremolo when using deeper depth settings.

Thirdly, we have the third iteration of the Echo Shifter delay. The ES3 features both delay and analogue and digital delays and you can now self oscillate via the pedal's tap tempo footswitch. Up the ante further with the delay time slider. This could be a great one for post-rock players.

Mooer is in the effects / modelling processor business for the long haul and continue to expand the line each year. It has slimmed down the flagship GE300 here, and the Lite is due "late summer" with a price somewhere between its GE250 and the original GE300.

It loses the expression pedal but there's still a comprehensive array of features showcased here in our video. Despite the somewhat out of tune demo guitar… ahem, you can't win them all!

After the first version sold out in 10 minutes via Reverb.com, the follow-up slims down this unique pedal (a distortion with a blendable analogue octave up and a booster based on Sunn O)))'s signal chain) and actually adds three new features in V2. And how cool does it look?!

Beetronics weren't the only effects company launching a new series at the show, Walrus Audio lifted the lid on the first pedal in its new Mako series. Its D1 ($299) is a its first true stereo in/out and MIDI controllable pedal.

This do-it-all delay has five custom-tuned programs; Digital, Mod, Vintage, Dual and Reverse. These can then be shaped with modulation, tone, age and subdivision controls.

The D1's Attack control can then soften or enhance the impact of echoes. The Age control can add grain and grit to your delay tone if required.

Walrus manager Jason Stulce went through the pedal's features with us on a very noisy NAMM show floor. Check the video after for a sound demo.

The most significant distortion unit launched at the show, the PG-14 is the meeting of minds between Gilbert and JHS honcho Josh Scott. It's breadth and versatility with wide mid sweep could prove to be a mainstay on many 'boards.