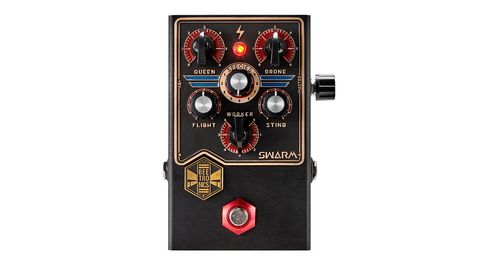 This pedal’s massive presence will certainly fill out your mix.

The latest pedal from bee-obsessed US boutique pedal makers Beetronics is the Swarm, which the brand describes as “an analogue fuzz harmonizer that sounds like a thousand killer bees coming to get you”.

A more technical description is that it turns your input signal into a square wave that is then processed (by multiplication and division of the frequency) to create nine possible harmonies, each with two voices in different octaves, which can then have modulation applied to them.

The basic square wave fuzz sound comes courtesy of the Worker knob, which sets the level of the input signal. By itself, it’s thick, buzzy and full of sustain. It’s a full-on sound that appears to be gated to stop any background noise when you’re not playing - something you may have to adjust your playing to. If you want to add the harmonies, they’re selected from the nine-way Species rotary switch, with each harmony’s two voices being added individually to the mix by the Queen and Drone knobs. Some of the harmonies are octaves of the original, but there are other musical intervals, such as a major 3rd, if you want to come over all Thin Lizzy.

Adding in the harmonies can give you a huge three-voice sound for playing meaty riffs and lead lines, although it’s not entirely straightforward finding sounds that suit, because they’re dependent on the Sting and Flight knobs that control the modulation and are very interactive. The Sting control sets the frequency modulation rate (basically how fast the harmonies follow your playing), while the Flight knob sets the response of the modulation and can set whether harmonies oscillate or hold steady.

It’s really a matter of grabbing the knobs and experimenting until you find something you like, be that fuzz, fuzzy liquid harmonies or something synth-like. Be aware that there are lots of completely hatstand sounds here - and yes, you can make it sound like a swarm of bees...

Unless you’re an extreme noise terrorist, this is probably not the sort of pedal you’d use on every song, but if you want to journey to an unexplored planet, tonally, the Swarm unleashes viscerally exciting Jimi-meets-synth tones. Its massive presence will certainly fill out your mix.