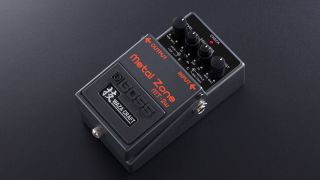 The promise of the metal distortion pedal has always been to transform any amp into a high-gain beast.

Now, if you’re sticking an Amptweaker in front of a Marshall stack, you might be able to squint and feel like it’s actually a Mesa or 5150, but more often than not these pedals have been bought by teenagers to run into cheap practice amps, and the effect is, frankly, underwhelming.

That’s the tip of the iceberg, however, and the options for fantastic high-gain pedals have never been better.

Even Boss’s much-maligned Metal Zone, every guitarist’s first high-gain stompbox, has had a minor reassessment, and it remains popular enough that Boss have even issued a high-spec Waza Craft version.

That’ll show the haters - as will the rest of these high-octane stompboxes. From thrash to groove to death, there's something in this list for you, and whatever it is, it's packing a ton of gain. Now, let's get heavy…

A crushing distortion from the designer of the 5150

Amptweaker is the brainchild of James Brown, the lead engineer on the Peavey 5150. With that heritage, you might be forgiven for having high expectations - and Amptweaker delivers. Compared with the original TightMetal, the Jr has a much better noise gate, lower noise floor and additional EQ options that allow it to take on some of the tonality of its FatMetal pedal. Convincing chug and powerful arpeggiated chords are easy to find with a Les Paul and a Jazzmaster. With the tight switch engaged, the pedal will even djent. With a seven-string in hand, you can smash out Tesseract without a mushy bass.

Kirk Hammett's signature distortion pedal is a brutal-sounding thing, with a raging stack-esque delivery. Background noise is kept to a minimum with an onboard noise gate, but the big selling point is the Doom knob, which dials in a monstrous landslide of bottom-end for that crushing tone that Kirk’s bandmate James Hetfield is renowned for. The Hi/Lo switch adds to the tweakability with the Lo setting upping the grunt factor for rhythm and Hi boosting the top-end and sustain for lead breaks. We also love the treble control, which has bags of variation. To have all this power in one reasonably affordable pedal is a dream come true for metalheads.

The best-selling yet misunderstood classic returns with added features

Though it’s a divisive pedal, we’ve always been fans of the Metal Zone. With a powerful EQ section and a wide sweep on the gain control, it’s easy to dial in punchy sounds that cut through a band mix. Shooting out standard mode on the Waza version with our original MT-2, we found the newer pedal a bit thinner with the same settings; it requires tweaking to get the ‘bark’ we’re used to, and it’s quieter than the original, too. Switching to the new Custom mode is another story. It’s full, throaty and easy to control at the bass end, though we still found the EMGs on our seven-string oversaturated it.

The number one pick for scooped modern metal

The Fullbore is a distortion pedal done to near-perfection. Fat and full at low gain, pushing the dial makes this pedal turn seriously nasty, with a saturated, jaw-breaking bark that punches holes in the mix and makes its rivals seem just a little polite by comparison. Tonally, it’s your dream ticket for modern metal, and that’s consolidated by the brilliant trimmings, with a scoop switch that instantly trims the fat from your tone, Metallica-style, and an optional noise gate that kills anything below a set volume (although you’ll need to disable it for more subtle play). There's enough tweakability to hold your interest, and with bone-snapping aggression, this is worthy of a slot on anyone’s pedalboard.

With a full, three-band EQ, it’s easy to dial in a punchy distortion sound. Pushing the mids and treble, with the voicing switch set to ‘open’, we’re reminded of the Marshall Shredmaster, albeit with a more intuitive mids control and a better output volume. With hotter Les Paul pickups, there’s a bit of fizz to tame at the higher-end of the gain knob, and while the ‘tight’ voicing is useful to tame rumble, some adjustment to the EQ, gain and volume controls is needed to achieve unity volume with the pedal in ‘open’ mode. It shines for chord work and lead lines, but is less at home with palm-muted styles.

Colossal high-gain tones from a US amp legend

This wide-ranging dirt box from the legendary amp maker packs a five-band EQ, plus a host more flexibility: the hi/lo footswitch toggles between more and less gain, with volume knobs for each mode; the boost switch - for extra low-end and dirt - is easily accessible, and you can also deactivate the EQ on the hi or lo modes. With a saturated, yet responsive chunk, the hi mode puts Foo Fighters, Metallica and Dream Theater at your feet, thanks to the extra EQ, which sparkles and scoops without any harshness. But while you won't find transparent break-up tones on the lo mode, its harmonically rich overdrive cleans up beautifully with the guitar's volume knob.

The iconic Boss HM-2 Heavy Metal distortion is the root of the Swedish death-metal tone, and Lone Wolf Audio's Left Hand Wrath is a "highly tuned HM-2", whose level, gain, high and low controls function like the original's four pots. The Vintage footswitch toggles bypass, while the Modern switch enables the new presence dial for treble focus. Other new adjustments include the midrange level (linked to highs in the original), and a switch to select vintage Japanese diodes (like the original), germanium diodes (smoother), or none (no clipping). The Left Hand Wrath can sound incredibly close to the original 'MIJ' HM-2, but with less noise, and even distorts in the same disgusting way when fed overly hot signals. The standout, though, is the presence control - for anyone who's tried to tame the HM-2's unruly harshness, this is a revelation.

View at Thomann
View at Andertons
Check Plugin Boutique
Huge British distortion sounds
Near-unlimited gain
Great value given the tones on offer
Could be overgained, even for metal!

The BE-OD pairs down Friedman’s Marshall-inspired BE-100 amp to pedal form.  Control-wise, it’s similar to a fully fledged preamp, and there’s an internal gain trim pot, too. This is a cracking all-round distortion. Its defined bite and increased output is very noticeable and the tight control does exactly that - removing flab - and the BE impressively retains its character across the gain spectrum.

The Pugilist offers dual gain engines (A and B) linked to a blend knob so you can have 100 percent A or B or a mix of both. This is a brilliant feature as there’s a wide variation of tone available from blending the two channels especially as each has its own adjustable gain and tone. Channel A offers a slightly milder distortion than B so you can use a touch of A with brightened tone to add clarity and pick attack to the saturated sound of B or have a mixture of both reminiscent of playing through two amps. You can also choose to run the two engines in series where full-on high-gain sound with rich harmonics is pretty much guaranteed.