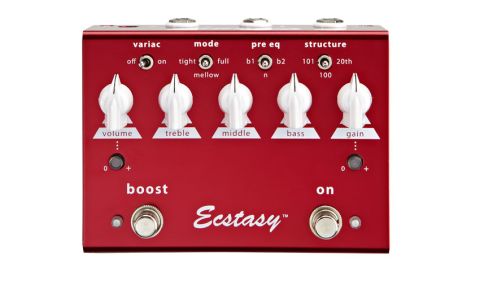 Reinhold Bogner is clearly just as adept at getting phenomenal tone from solid-state circuits or valves: the Ecstasy Red pedal rates among the very best in its class.

The designer and name-sake of Bogner amps turns his hand to solid-state pedal design and unveils the a new distortion stompbox, the Ecstasy Red pedal.

One of the original 'boutique' designers, Reinhold Bogner belongs to an elite handful of amp builders who have made a profound impact on modern electric guitar tone. From the monster three-channel Ecstasy to the brilliant Duende, Bogners are stylish, quirky, bombproof and sound like no other amp on earth.

Indeed, many stars have made the Bogner sound their own, including Aerosmith's Brad Whitford, Steely Dan's Walter Becker, Steve Stevens, Scott Henderson and Lyle Workman to name just a few.

Recently, Bogner's fame has spread thanks to a relationship with modelling amp supremo Line 6, but he continues to build his own products from his shop in Hollywood. Among his latest creations is a pedal that promises some of the biggest valve amp sounds known to man in a smaller and more affordable package: the Ecstasy Red.

Inside, the electronics are contained on two high-quality printed circuit boards with gold-plated tracks. There's a mix of quality surface-mount and miniature components, with large portions of the circuits potted in epoxy to prevent competitors from reverse-engineering them. There's also a true bypass on/off switch and a second switch operating a boost.

In addition to input and output, there's a third jack for remote switching of both functions and an external mains connector for a regular nine-volt DC supply. The PP3 battery sits behind a small aluminium flap, fastened by a large-slotted machine screw - simple and practically unbreakable.

The Ecstasy Red is based on a channel of Bogner's long-running Ecstasy head, first introduced in 1992. Since then, it's been through several revisions, and the pedal has features that mimic the gain and tone network changes.

Overall, it's easily up to the standard we've come to expect from Reinhold's Hollywood workshop: it's robust, built with exceptional attention to detail, and looks good, too.

We tried the Bogner out with a variety of guitars, including a PRS CE with HFS humbuckers, a Les Paul Standard and our Seymour Duncan APS-1- powered Strat. We used several amps, too, from high-end boutique products to gnarly pawn shop rejects. It won't work sonic miracles with less than half-decent amplification - but with a good, Fender-style clean channel driving a 2x12 cab with Vintage 30s, the results were superb.

The Ecstasy Red delivers stunning overdrive, from mild, bluesy attack emphasis to the vocal, singing sustain that Bogners are known for, with a lack of fizz and a complex midrange that's never nasal or peaky. The Red retains nearly all of the dynamic touch- sensitivity of its namesake, making it easy to rein in the aggression by simply backing off on the pick or rolling a little off on the guitar's volume control. This was particularly noticeable with the Variac switch set to on.

The three-way Mode and Structure switches considerably expand the pedal's gain and tone ranges: the Mode switch's Tight setting adds more gain and a tighter bottom-end with increased midrange and highs, Mellow lowers the gain and darkens the overall sound with the lowest gain and a darker overall tone, while Full has a full-spectrum gain boost with an open, less focused low-end.

The structure switch's 101 setting works best for more vintage tones with a slightly reduced midrange, while the opposite is the case for the 100 setting, which makes the mids more forceful. Meanwhile, the 20th Anniversary setting boosts mids and highs.

While the Red sounded good with all the guitars we plugged into it, we felt that it was best suited to humbuckers. The footswitchable boost function adds extra versatility, and turns any good single-channel amp into a three-channel monster.