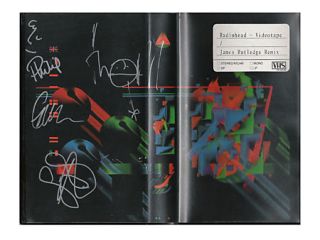 Radiohead are flogging a one-off remix of their song Videotape, remixed by James Rutledge and recorded onto a four-hour VHS tape. It's being auctioned on eBay to raise money for the charity Missing People.

The tape's accompanying red, blue and green "disintegrating" visuals were designed by Philip M Lane while the matching artwork (fully signed by the band) was designed by Jacob Brandy.

Expect a decent remix, too. James Rutledge has previously mashed-up the likes of Bloc Party, The Kills and - darlings of 2008 - MGMT.

The eBay description touts the VHS as "the ultimate Christmas gift for any Radiohead fan." And yes, you'd be the 'ultimate friend of a Radiohead fan' if you shelled out what will undoubtedly be a small fortune. It's for charity, though, so dig deep…