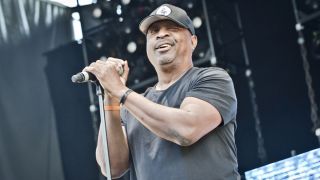 Well, it’s 1 April and it appears that the joke’s on us. Maybe. Public Enemy’s Chuck D says that his recent spat with fellow Public Enemy member Flavor Flav was nothing more than an elaborate hoax, designed in part to promote a new Enemy Radio album that’s released today.

Enemy Radio is described as an auxiliary unit of Public Enemy made up of Chuck D, DJ Lord, Jahi and the S1Ws. Notably, and slightly confusingly, the new album’s lead single Food As A Machine Gun also features Public Enemy, which includes Chuck D and - yes - Flavor Flav.

Last month, Chuck D and Flavor Flav seemingly engaged in a very public war of words following Flav’s apparent refusal to perform at a Bernie Sanders rally, ending with a statement from Public Enemy suggesting that Flavor Flav was no longer part of the band. However, it now seems that this isn’t the case.

"I had watched Orson Welles' 'War Of The Worlds' from 1938 when he pulled the wool over the public's eyes as they put 100% belief in the technology of radio," explains Chuck D. "Most people followed like a Pavlovic dog just like they do now. Flav doesn't do benefits and stays away from political events - we been cool and always agreed about that. Enemy Radio was built for that reason, to be a DJ+MC auxiliary unit of Public Enemy, a no-slack homage tossback to DJ+MC roots. It is DJ Lord, myself and Jahi with the S1Ws. Hearing the confused mush of political talk while under the bowels of Trumpotus made me use a presidential stage as my platform. Out of this storm came a plan between Flav and me to remind people that what's important should have as much, if not more, value than just what's popular. Thus came the HOAX, our 'War Of The Worlds.' Believe half of what you hear and NONE of what you see."

In a press release, it’s also suggested that the hoax was concocted in order to illustrate how the media disproportionately covers bad news over good news when it comes to hip-hop.