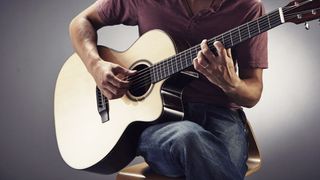 Guitar skills: If there’s one thing guaranteed to take your songwriting skills to new heights, it’s arming yourself with a bunch of new chords. Develop your own voice on the acoustic guitar with our tutorial on creative chord shapes.

If you've recently starting playing guitar you’ve probably already tried some of the most common open chords (so called because they include un-fretted or ‘open’ strings), such as C, A and Em.

If you’ve got the basics covered, the variations shown here should inspire you with some new sounds without being too much of a challenge to play. Em7 and Cadd9 are widely used, Em9 and A6sus2 are rarer - and both have a lush, bittersweet sound.

We've worked all four chords into a simple strummed sequence for you, but we recommend experimenting with using them in your own chord progressions.

Sus chords are a special kind of chord that are neither major nor minor and, with their neutral character, they can inject sparkle and movement into otherwise simple chord progressions.

Have a go at these shapes and try alternating between the sus chords and more basic major and minor chords.

Sus chords nearly always sound good when played before a major or minor chord that uses the same root note, Bsus4 to B, or Asus4 to A, for example.

In blues ‘dominant’ 7 chords (A7 or D7 for example) are more common than basic major, minor and sus chords.

Bm7 is just the ticket for a moody minor blues; if you improvise around this chord, try using the D7 shape four frets higher to create a Bm7 and F#7 progression.

We've played this blues line fingerstyle and added in a few single notes and string mutes (marked X) between the chords for a sparse bluesy feel.

You already know your open chords, right? We’re talking about C, A, G, E, D and their minor variants at the headstock end of the fretboard.

Well, adapting and moving those shapes around the neck with one, two or even more strings kept open is a great way to create new chords and new sounds. Try out the chords we’ve chosen for you and then experiment by moving the shapes around the fretboard.

The rich sounds here are the effect of droning open strings and the wide intervals between fretted notes and open strings. There’s a lot of mileage in this simple approach. Experiment by moving these shapes around the fretboard.

It's the daddy of altered tunings, favoured by singer-songwriters and folky fingerpickers alike.

Sure, new tunings can be a challenge as you learn the relationships between the ‘repositioned’ notes. But it also means you’ll be surprised, and hopefully inspired, by what you play, and DADGAD is surely unrivalled for its sheer user-friendliness.

The chords shown here should be enough to get you started, but experimentation is the name of the game.

It's good to experiment with arpeggios and explore other notes around the chords you know. This fingerstyle arpeggio idea is essentially just a D and G chord sequence.

A staple Celtic tuning, open Csus2 tuning (CGCGCD) is the lesser known cousin of the Dsus4 tuning of DADGAD.

Providing excellent scope for drone-like strumming and deep, resonant bass notes, we struggle to see why this tuning doesn’t share the popularity of DADGAD (although you may need a set of heavy-gauge strings to reach those lower notes). Try moving the C chord around the fretboard for instant, rich chord-melody ideas.

The shape we’ve used in bars 1 and 2 can be moved up and down the fretboard and it sounds great in nearly every position. If you only learn one shape in CGCGCD, make it this one.