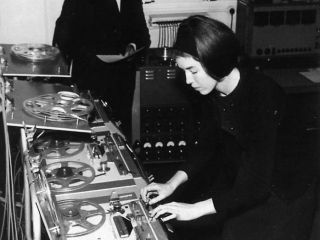 The majority of sci-fi films and TV shows would be nothing without their visual effects, but it's their sounds that tend to stick in your head long after the end credits have rolled.

We've picked out seven of sci-fi's best-known effects below. Plus, you can find out how inventive sound designers went about creating them.

So what exactly does it sound like to have your body disassembled molecule by molecule and shuttled off to some purple-hued alien planetscape? The visual effects that depicted Star Trek's Ensign Redshirt's fateful journeys planetside were so expensive that they were only ever used twice per episode. The shimmering sound that signalled the doomed lieutenant's departure was created via a collection of piano strings hung from a beam.

It's the sound that sent generations of children scurrying behind the sofa. We're speaking, of course, of the metallic intonations of those motorised pepper pots from the planet Skaro. Symbolising the dehumanisation of life under a fascist regime, Davros' dear Daleks delivered their commands in a voice bereft of all emotion. Much of the credit for the chilling effect must go to the skilled actors who delivered the lines, but it was a ring modulator that gave the Daleks' voices their inhuman quality.

That elegant weapon of the Jedi Knights, the lightsaber crackles and buzzes as it slashes through the air. Star Wars sound designer Ben Burtt created the sound by combining the transformer hum from an old projector with the sound of interference derived from passing a microphone behind an old cathode ray tube television (hear him talking about the process below). He gave the sound motion by playing it back through a speaker and re-recording it with a shotgun mic that he waved about in sync with the visuals.

The BBC Radiophonic Workshop was one of Britain's rarely recognised national treasures. Responsible for so many musical scores and sound effects, it quite literally defined the sound of adventure for countless schoolkids. And what better vehicle to whisk us off than a battered blue police call box? The wheezing, groaning sound of the Tardis as it materialised was derived by sound designer Brian Hodgson from a key being drawn across a piano string. This was then combined with a reversed echo and a bit of electronic oscillator wobble.

The electronic chirps and twitters of the beloved astromech droid are a keen example of the power of sound effects. Nary a word was uttered by Artoo, but we knew what he was trying to say even before C-3PO translated for the audience. The sound was, of course, developed by Ben Burtt, who used the sounds of an ARP 2600 synthesizer and his own voice to produce R2-D2's silicon salvos. The ARP in question was recreated virtually via Symbolic Sound's lofty Kyma system for more recent Star Wars movies.

George Pal's stunning 1953 adaptation of Wells' novel floored audiences with its fabulous depiction of an attempted takeover by our Martian neighbours. From the hissing, metallic throb of the Martian War Machines to the resonant blasts of their ray of destruction, the Oscar-nominated sound effects broke new ground and set impossibly high standards for future film makers (rather than try to better them, filmmakers simply re-used the effects from this film). The terrifying sound of the Martian death ray was achieved by reversing and reverberating the kerrang from a quartet of amplified guitars.

If the voice of any alien is as recognisable that of the Daleks, it must be the frequency-shifted timbre of Star Trek's biomechanical Borg. The classic threat, "You will be assimilated. Resistance is futile", was processed through Symbolic Sound's Kyma system by talented Hollywood sound designer Francois Blaignan. As this is the third time we've mentioned Kyma, you've probably guessed by now that this software-driven mainframe is frequently the tool of choice for Hollywood sound effects designers. Unfortunately, its price tag puts it out of reach of all but the most dedicated, but we can come pretty close with readily available graphical sound design languages such as CSound and MAX/MSP.

For a comprehensive guide to sampling, check out the latest Computer Music Special (volume 34), which is on sale now.