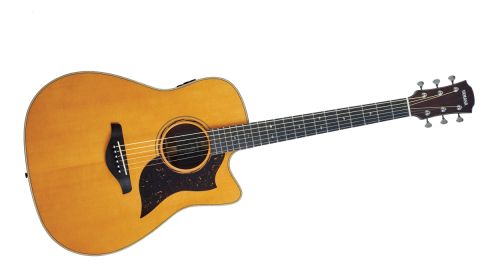 A great-looking cutaway dread’ with plenty to offer.

Any acoustic player wanting to play on stage will know it can lead to a fundamental compromise.

There is traditionally a gap between how we enjoy the sound of our guitars and the way they’re represented plugged in. Piezos, transducers and magnetic soundhole pickups are all avenues players can take, based on their tastes and needs, but none can represent the character and tonal detail of their guitars like a large diaphragm condenser mic.

It’s the recordist’s choice, but one that presents too many obstacles of feedback and positioning in live performance to be practical. Even piezo/mic blend systems can fall victim to the issue. So where now in the search for improved acoustic tone?

Enter Yamaha, a leader in stage-ready acoustic technology for decades - and in an update to its A Series, it may have just offered us a very desirable solution.

So the flagship Japanese A5R model is built for stage use, but the considerations to general playing enhancement made here go further than the new SRT2 (Studio Response Technology) pickup system. We’ll get to that in due course.

The top has been treated with Yamaha’s ARE (Acoustic Resonance Enhancement), its take on torrefaction, to offer more vintage-voiced warmth. If the effect of torrefaction on a model’s tone is sometimes hard to distinguish, the rich dark gold hue of the A5R’s vintage natural solid Sitka spruce top suggests the process played a cosmetic role, too.

Scalloped bracing is employed on the top board and shorter bracing for the back, and Yamaha claims this will result in a louder and stronger midrange. Build feels reassuring in weight for road use, and the mahogany binding adds a premium quality.

We especially appreciate the way the A5R headstock’s rosewood face subtly ties with the back and sides. It doesn’t just feel like a premium Yamaha build; it has a heritage quality to its look. Indeed, if Yamaha’s build and electronics technology are looking forward, there’s clearly a conscious effort to keep the cosmetics traditional - even the pickguard shape of these models nods back to the design of the company’s 1975 N1000 model.

The ‘hand-rolled’ fretboard edges here turn out to be a very pleasant discovery in play, adding to a buttery smooth experience with the A5R’s ebony ’board that’s coupled with a low action that electric guitar converts should take to quickly. Even with the more affordable model’s higher action and rosewood ’board, the rounded fretboard edges offer an enjoyable playing experience that mimics the feeling of guitars that have been played in to a degree. The bright A5R yields an ethereal quality in the high ranges, even though some treble resonance is traded with the lower action.

The SRT2 isn’t a new concept for Yamaha. Like the original SRT launched in 2011, it’s the company’s take on a mic blend system with a piezo, except the second tone source isn’t a physical mic - it’s a digitally processed signal with two mic models on offer. Type one is a Neumann U67 large diaphragm condenser and type two offers a Royer R-122 active ribbon mic.

Yamaha has streamlined the SRT preamp options and controls: four knobs on the upper shoulder with one choosing the balance between piezo and mic simulation; pushing it in chooses between the models

The condenser model proves best for chordwork with more headroom for hard strumming, while the ribbon offers lower-end presence that gives fingerstyle more girth. Does it sound like the real thing? There’s the natural feel of lower-end presence with air and detail here that doesn’t sound artificially processed.

Crucially, dialling in the mic captures the character traits of these guitars that we mentioned earlier. The A5’s resonance and bright balance is a fine showcase for the SRT2 - we actually couldn’t dial in a ‘bad’ sound on it because the treble and bass controls mirror the natural subtlety of the pickup/mic dynamic design. For players that are used to dreading the compromises of plugging in, the blending scope here could be liberating.

An electro experience that captures the sound of an unplugged acoustic? The SRT2 is one of the closest to get there yet, an update that marks the A Series out as an essential consideration for players who rely on a consistent and controllable stage sound. This won’t be an avenue for percussive players, but for the rest of us, just add some reverb and compression on tap and new horizons await.

This improved system update underlines that acoustic tone should be about more than just the practicalities of live performance; if you feel good about your sound because you sound better, you play better. And in terms of aiding that and upholding its reputation as a leader in the electro side of the acoustic market, Yamaha is still on its ‘A game’ here.