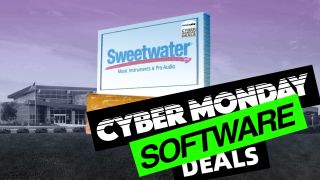 Sweetwater has upped the anté, yet again, with dropping a whole bunch of software deals for Black Friday and Cyber Monday and there are some stunners.

Since the beginning of all the Black Friday shenanigans, the retailer has reduced even more software, plugins and bundles over the weekend. As we enter into the Cyber Monday phase we've rounded up even more of those bargains for you.

There are some great deals on Soundtoys plugins with the likes of the Crystallizer, FilterFreak and Primal Tap plugins all reduced to just $29 each.

If you're in the market for a softsynth with some serious sound-shaping power, then brace yourselves as Vengeance-Sound VPS Avenger is now half price!

Perhaps one of the best deals we've seen this weekend is XILS-lab slashing $110 off the price of XILS 3 EMS VCS3 emulation plugin, leaving you the need to only fork out $49 - bargain.

Something you don't get to see too often are deals on Ableton Live and Push controllers.  Get $187 off Live 10 Suite and nearly $400 off the Push 2 and Live 10 bundle.

Toontrack EZdrummer 2 has taken a $60 hit, now cruising in at a cool $89 for one of the best drum emulation apps out there.

Positive Grid BIAS bundles are tumbling in price with the biggest saving to be had on the Platinum and Elite versions of BIAS Amp and BIAS FX.

If you're looking for a new fully-featured DAW, then you should check out the deals on PreSonus Studio One 4.5, with the Pro edition coming in at just $199.97.

Shop all the Sweetwater plugin and software deals

XILS-lab XILS 3: was $159, now $49
XILS 3 is based on the classic, semi-modular EMS VCS3 - which serves up a banquet of holy-grail vintage analogue goodness, just like the original. Unlike it's ancestor, however, XILS 3 is easy to program and more affordable than ever.View Deal

XILS-lab Oxium: was $99, now $29
XILS-lab put a lot of work into making Oxium's filters behave more like analogue circuits than digital processes, giving you ultra-smooth bass, vibrant leads, captivating pads, and anything else your mind can cook up. View Deal

Soundtoys Crystallizer: was $149, now $29
Get that retro-cool pitch processing and echo action from Eventide H3000's Crystal Echoes preset in a very flexible plug-in. Saving you a cool $120 in the process.
View Deal

Soundtoys PrimalTap: was $149, now $29
Based on the Prime Time hardware delay from 1978, PrimalTap delivers everything from subtle chorusing and flanging to complex multi-tap delays. It's perfect for lo-fi echo effects, at the lo-lo price of $29.
View Deal

Soundtoys FilterFreak: was $149, now $29
Want to get creative with your sounds, but you also love that analog vibe? Want to save a whopping $120 in the process? Look no further than the amazing FilterFreak, a filter plugin that gives you a classic, warm analogue effect.View Deal

Ableton Push 2 with Live 10 Suite: was $1,398, now $999
The ultimate Ableton-lover's bundle: Live 10 Suite and Push 2 together for $999, a saving of $399. Get the dedicated pad controller and control surface for Ableton Live with 64 pads and colour LCD display.View Deal

Positive Grid BIAS Elite Amp and FX: was $399, now $159
This guitar software bundle includes BIAS FX 2 Elite, and BIAS Amp 2 Elite. 100s of amp and effects models combined with the powerful Amp Match technology and all of this can be yours for a total saving of $240.View Deal

Toontrack EZdrummer 2: was $149, now $89
Save $60 on Toontrack's EZdrummer 2 virtual drum software and open a world to MIDI and EZX packs.
View Deal

PreSonus Studio One 4.5 Pro: was $399.95, now $199.97
Studio One 4 takes another step forward with the addition of Harmonic Editing, Patterns and the XT instruments. Get 50% off this hugely popular DAW this Black Friday.View Deal