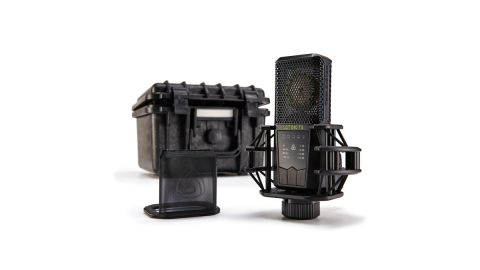 The LCT 640 TS is an impressive mic, offering a combination of traditional and forward-thinking functionality.

The TS stands for Twin System: it works either in regular multipattern mic mode, or in dual mode, providing independent access to both diaphragm outputs. This allows adjustment of the pickup pattern after recording and also opens up some stereo recording options.

On body options include low cut filter (40 and 80Hz at 12dB/octave or 160Hz at 6dB/octave), output attenuation (0, -6, -12 or -18dB) and mode - regular multipattern or dual with twin output. The backlit logo colour indicates the current mode and the logo freezes on red to indicate capsule clipping.

In dual mode the second diaphragm output is accessed via a miniature three-pin connector on the side of body, and in the carry case there's a mini three-pin XLR breakout cable as well as accessories such as foam windshield, suspension cradle, mic pouch and a rather nifty magnetic pop shield. All told, it's a well put together and stylish package.

Switching through the five patterns in regular multipattern mode reveals a uniform sounding mic which is bright though not overhyped in the high frequencies, with solid though not overly woolly low mids. For the directional patterns proximity isn't overbearing, and the three low cut settings provide plenty of options for taming rumble and proximity.

In twin output mode you need to hook up the second output to a second phantom powered mic pre with identical gain. With both outputs recorded to individual tracks you can then decode the signals. To do this manually Lewitt includes level and polarity instructions.

However, the simpler option is their free Polarizer plug-in. This takes a hard panned stereo input (front diaphragm left, rear diaphragm right) and outputs a dual mono signal. Its smooth slider moves from omni at one end via cardioid and super cardioid to figure 8 in the middle, then the back diaphragm becomes the front as it continues through similar options to a phase inverted omni at the end.

By turning the LCT640 TS side on to your sound source, the twin output also opens up stereo options. Panning the outputs in opposite directions delivers a stereo image with the pan amount adjusting the width. Or bouncing these signals via Polarizer to create two individual signals, figure-8 and omni, provides the source signals required for manual mid side (MS) decoding.

Impressive, and although you're primarily relying on the off axis frequency response of the diaphragms for the phantom centre, it sounded pretty good. Overall, the LCT640 TS is a fabulous mic and you get a lot of functionality for your money.