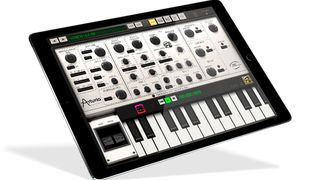 Despite what you might have read on a forum somewhere, when it comes to music-making, iPads are far more than just ‘toys’. In fact, an iPad is a great thing for pretty much any type of musician to have: you can install a DAW app and use it for full-on music production; it can run great-sounding synths, drum machines and other instruments; it can model guitar amps and effects; and you can display sheet music on it.

The good news is that whether you’re looking to upgrade to a new iPad or purchase your first Apple tablet, now’s a great time to buy. Post-Christmas discounting means that there are deals to be had, and we’re here to tell you about them.

But what is the best iPad for music-making? The new iPad Pro is as good as you’re going to get, offering the most powerful processor and sharpest display. It’s available in 12.9-inch and 11-inch configurations, with prices starting at $999/£969 and $799/£769 respectively for the 64GB WiFi models before any discounting.

Don’t discount the regular 2018 iPad, though. It might have a smaller 9.7-inch display and a less powerful processor, but it’s still more than capable of running the best iPad music-making apps. What’s more, its Lightning connector means that it’ll be compatible with far more of the best iOS music-making peripherals than the iPad Pros, which have switched to USB-C. And then there’s the issue of cost: the regular price for the entry-level 32GB iPad model is $329/£319, which is less than half what you’d pay for the cheapest iPad Pro.

We’re less inclined to recommend the iPad mini, especially at the standard price of $399. You do get 128GB of storage for that, but it’s powered by the ageing A8 chip and is definitely due an update. It’d have to be a pretty massive iPad mini discount to tempt you.

Below are the best iPad deals for music makers that are available right now.

Apple iPad 9.7 32GB (2018): now £289 at John Lewis
Yes, it's the entry-level iPad, but making music on this 32GB model will still be a pleasure. If you've been waiting for Apple's tablet to drop below the £300 mark, here's the deal for you. You also get the bonus of John Lewis's 3-year guarantee.View Deal

iPad mini 4 £ £299 at John Lewis
Although, as we've said above, we do have reservations about buying an iPad mini 4, at this price it's worth considering, especially as it comes with 128GB of storage.View Deal