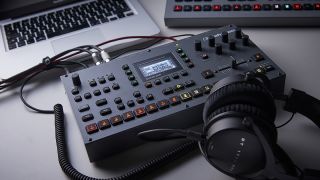 Not so long ago, the hardware sampler market was on life support, with software alternatives seemingly set to render physical units obsolete.

The best drum machines 2020: our pick of the best grooveboxes for beginners and pros

Just as with synths, though, producers and performers have realised that there are benefits to owning a hardware sampler, not least because many of the current products enable you to create music without the need for a computer.

So, prepare to rediscover how joyous the sampling process can be, as we round-up some of the best hardware products that we've reviewed, ranging from pocket-size modules to full-on production platforms.

The best samplers you can buy right now

View at Reverb
Preorder at Andertons
View at Thomann
Radically more advanced than most competitors
New screen, buttons and rotaries improve on the original and speed up workflow
Lacks Overbridge compatibility or USB MIDI sync
Deep and complicated workflow

The MkII upgrade of Elektron’s eight-track sampler is mostly about the hardware – bringing improved build quality but not a lot in the way of new features. Despite this though, the Octatrack remains arguably the deepest and most powerful performance sampler on the market. The workflow can be pretty intimidating and at times a little unintuitive, but once you get around the instrument’s foibles this is a truly creative sampler. Between deep sequencing and automation, excellent-sounding effects, extensive audio manipulation capabilities and a comprehensive song/pattern system, there’s a lot of potential on offer from this relatively compact box. With little in the way of meaningful DAW compatibility the Octatrack is at its best as a standalone studio hub or live performance tool. Additional MIDI sequencing tracks make it a solid hardware ‘hub’ though. If freeing yourself from the computer screen is your goal, this could be the way to go.

Sample in the wild with the most independent MPC ever

View at Reverb
View at Reverb
View at Thomann
It’s a properly standalone MPC, with built-in memory, processing and rechargeable battery!
A near-DAW level of sequencing, sampler, recording
Editing capabilities neatly handled by the minimal interface
Workflow can feel a touch disjointed and convoluted at times

With a built-in rechargeable battery, the MPC Live is a truly ‘standalone’ sampler, allowing users to create full tracks free from not only a computer, but also the need for a power source. Ever wanted to record in the woods or make beats out on some desolate moor? Then this could be the machine for you. It makes use of the same MPC 2.0 software as its controller predecessors, which offers DAW-level sequencing, editing and full audio track recording. There are a few limitations in standalone mode – a maximum of eight audio tracks, no third-party plugins – but projects are fully transferable to the desktop version of the software, where the MPC Live can act as a controller, making for an easy bridge between studio and standalone use.The software workflow can be a little muddled and convoluted at times, but that doesn’t detract from how capable this is for a standalone instrument. For our money, this is the most exciting MPC Akai have produced in years.

A sampling and sequencing behemoth that could be your studio centrepiece

Like its smaller sibling, the MPC Live, Akai’s flagship MPC X can function either as a standalone instrument, running the MPC 2.0 software via its internal CPU, or as a controller, paired with a Mac or PC. Unlike the Live, however, there’s no internal battery in the X, so its standalone mode is slightly less ‘free’ – a fact compounded by its considerably larger size. This reduction in portability is made up for with an enhanced crop of front panel controls and a generous supply of inputs and outputs. This includes eight assignable CV/gate outs, which make the MPC X a good partner to a modular set-up or rack of classic synths. As a flexible studio centre-piece, this sampling and sequencing behemoth has a lot to like about it.

Take your studio creativity into the DJ booth

Essentially, the DJS-1000 takes the engine of Pioneer DJ’s SP-16 and places it into a CDJ-like chassis designed for use in the DJ booth. While the differences between the two machines are fairly minor – here we get fewer outputs, and swap the analogue filter for a performance multi-effect – the overall effect makes the DJS-1000 feel more intuitive and instantaneous than its sibling. Familiar DJ-style transport controls and pitch slider mean the users can beat-match with the DJS-1000 like a traditional CDJ or vinyl deck, making it great for adding a live production element to DJ sets. The fast and fluid sampling makes it a doddle to grab and manipulate samples from another deck too. While it’s most at home in the DJ booth, building beats with the DJS-1000 is so addictively fun we could see it becoming a studio favourite too.

Deep creativity and advanced sequencing at a more accessible price

Digitakt is a sampling drum machine and MIDI sequencer. With a purely digital architecture, it was Elektron’s first non-analogue offering since before the release of the Analog Keys in 2012.Triggering and sequencing of the Digitakt is done with two rows of plastic buttons that bring to mind the clicky feel of a vintage computer keyboard, albeit sturdier. It features 16 channels divided into eight audio - ie, sampling - channels and eight MIDI channels. Samples can either be loaded via the internal memory or sampled from Digitakt’s audio inputs. The process of sampling is fast and fluid, and can be done without the need to pause the sequencer. Despite a couple of minor gripes, Digitakt lives up to the promise of offering Elektron’s deep sequencing functionality at a (comparatively) affordable price. Not a box to underestimate!

A fast and intuitive sampler well-equipped for studio or stage

With 16 channels, each capable of sampling up to 30 seconds, plus a step sequencer, performance pads, touchscreen control and an analogue filter courtesy of Dave Smith, Pioneer's Toraiz SP-16 is well-equipped for both studio and stage. In use, the SP-16 has a very fast and fluid workflow. The combination of the velocity sensitive performance pads and step sequencer make it exceptionally easy to input, play, record and tweak sequences. Sample browsing, loading, recording and editing functions are mostly handled by the touchscreen and surrounding rotaries. The SP-16 has been refined considerably since its release, but still feels a touch on the pricey side. However, the hardware itself is great, the general workflow is a lot of fun, and it does a very good job of bridging the gap between the studio and live/DJ realm.

A mid-priced sampler that pairs well with Ableton Live

The Electribe Sampler gives the user the choice of importing or recording their own audio to use as the raw content with which to build their own tracks. It's very easy to get up and running. Each front panel pad (a 'part') can be assigned a sound. Press record and play, and bash the pads to create a pattern. There are buttons for muting and deleting parts, and switching to keyboard mode enables you to play a part melodically. All things considered, the Electribe Sampler is a worthy successor to its forebear the ESX-1. The inclusion of ROM-based content and synthesis capabilities is useful, though it's a shame some of the more interesting filter types weren't carried over from the non-sampling version. For those wishing to free themselves from the tyranny of the mouse or streamline their live set-up the Electribe Sampler may well be the answer.

Bargain sampling inspired by the classics

The Volca sample is a 10-part sample sequencer inspired by "the excitement of the first generation of samplers" and sports a white, red and grey colour scheme that gives a cheeky nod in the direction of the classic MPC. There are 11 shaping parameters for each of the ten sample slots. These allow you to tweak the start point, length and playback speed of the sample, adjust the level and pan, and apply a low-pass filter. Each also has a pitch envelope, with Int, Attack and Decay controls, and an amp envelope with Attack and Decay. There is one very notable omission, in that the Volca sample features no built-in sampling capabilities of its own, but it can be loaded with user samples. Ultimately, this might be the most fun, flexible and inspiring Volca product yet and, at this price, that's what really matters.

A sample source for drummers and producers alike

The SPD-SX inherited many of the great features of its predecessor, the SPD-S, but boasts infinitely more sample memory, USB sockets, a larger display (with a raft of on-screen wave editing features), improved sound routing, more responsive pads, intuitive menus, innovative sampling and a host of significant system enhancements and design refinements. The SPD-SX has nine playable pads with two dual input sockets, enabling the connection of up to four additional external pads, drum triggers or a combination of both. Due to its ease of use and user-routable sound outputs (headphone/main out or sub out), the SPD-SX is equally happy on stage and in the studio. A great product for drummers and producers alike, then.

A truly portable sampler with a lo-fi vibe

The PO-33 K.O! offers 16 sample tracks, with a shared sample memory of up to 40 seconds. These come pre-loaded with a selection of sounds, but each can be easily overwritten by recording via the mic or mini-jack input. The sample tracks are divided into two banks of eight, labelled Melodic and Drum, which behave slightly differently when played via the pad grid or sequencer. Unsurprisingly, the sound quality is fairly lo-fi, though this does lend a nice crunchy, old-school quality to the KO!. It’s fun to mess around with, and while it can be tricky to get super precise with sampling and sequencing, recording a few clips and haphazardly messing around with them is a great way to create spontaneous little hooks, loops and unexpected sounds.