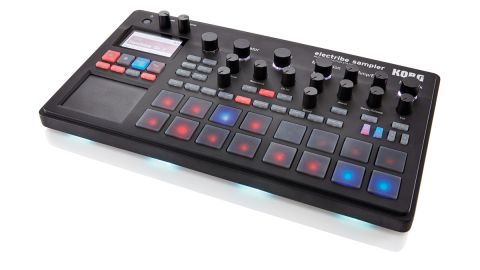 Not the perfect sampling solution, but fun to use and a creative alternative to the ever-present DAW.

A few months back we looked at the Electribe Music Production Station, the long awaited follow-up to the EMX-1 (itself the third iteration of a long-running Korg range).

This time Korg slips the word sampler into the title, and gives the user the choice of importing or recording their own audio (to use as the raw content with which to build their own tracks).

Visually the units look similar, with the Electribe Sampler taking on a moodier, darker - but still somewhat monochrome - vibe. One thing we found with both Electribe boxes is the need for an external light source in gloomier conditions - such as on stage.

Despite, somewhat deceptively, looking like a mainly plastic affair, the chassis is metal and feels substantial in terms of weight. The matte-painted front panel marks easily but is robust.

Like its sister, the EMPS, this unit predominantly utilises a series of front panel knobs and a plethora of buttons. Lower-level changes are achieved via the LCD screen and data wheel and, although this is unavoidable, it is relatively straightforward.

Despite appearing almost identical, the Electribe Sampler adds, as you would expect, the functions required for the capture and editing of samples, but also loses a few things along the way.

Something we didn't expect was the inclusion of hard-wired content. Earlier units provided factory samples to get you started, but these could be overwritten by the user.

Here we get over 400 drums, melodic hits and stabs, FX, phrases and loops - all still labelled Oscillators in the Korg parlance. A few of the virtual-analogue oscillator types are maintained which each have one editable parameter (such as oscillator detune) - the rest, like user samples, use the Edit knob to adjust the sample start position and engage reverse playback.

It's very easy to get up and running with the Electribes. Each front panel pad (a 'part') can be assigned a sound. Press record and play, and bash the pads to create a pattern. There are buttons for muting and deleting parts. Switching to keyboard mode allows you to play a part melodically.

Diving into the onscreen menus provides options for adjusting key and scale note mappings for the pads. In some respects, this allows you to come up with lines that you would not automatically create when sat at a conventional keyboard.

Chord mode maps common chord types to each key, while Sequencer mode turns the pads into an X0X-style step sequencer.

On the Electribe Sampler this is also used to playback 'time-sliced' loops - similar to Recycled REX loops - that playback in time the current pattern at a wide range of tempos.

Quantising is automatic, and Swing is dialled in globally, however the 25 built-in groove templates (and associated depth control) can be assigned per part, and they work a treat.

The effects are also split into global and part-based selections. As well as its own IFX, each part can be routed to the master effects (MFX), which is controlled and edited via the touchpad, which can also be used for playing notes and manipulating the Gate Arpeggiator.

The ES offers a similar range of sound editing/programming options as its sibling, though the filter section now only offers single low, high and band-pass options.

What appears to be a simple single envelope modulation section disguises the 72 modulation routings hidden inside. This includes a host of LFO driven settings routed to all manner of parameters (with many locked to the tempo of the pattern).

If you fancy a more hands-on approach, changes to the touchpad, most of the knobs and some of the buttons can be automated using Korg's Motion Sequencing system, something that has found much popularity of late with their cut-price Volca boxes.

Although the Electribe is more than capable of working as a standalone device, it includes the neat option - first introduced in Korg's iPad-based Gadget software - to export the individual parts in a pattern as a series of WAV files alongside an Ableton Live Set.

The Electribe's Parts translate well to Live's Clips. The built in sampler also allows you to resample a full pattern or part as a new single sample.

The biggest drawback of the Electribe Sampler for me relates to the way in which samples are saved. Any new samples must be exported to the memory card before powering down, otherwise they disappear - even when you recorded, named, wrote and used them in a pattern. Sadly, this is not a particularly fast process.

Despite the knobs and buttons, you will still need to dive into the onscreen menus, though this is less painful once you familiarise yourself with the Shift button shortcuts. It would have been nice to have these listed on the front panel, even at the expense of undermining the minimalist design.

All things considered, the Electribe Sampler is a worthy successor to its forebear the ESX-1. The inclusion of ROM-based content and synthesis capabilities is useful, though it's a shame some of the more interesting filter types weren't carried over from the non-sampling version.

There is only one set of audio outputs - limiting for some - though at least they are full-size jacks, unlike all the other connections (including MIDI) that use mini-jack connectors. That said, the range of syncing options (MIDI and analogue) is good.

For those wishing to free themselves from the tyranny of the mouse or streamline their live set-up the Electribe Sampler may well be the answer.