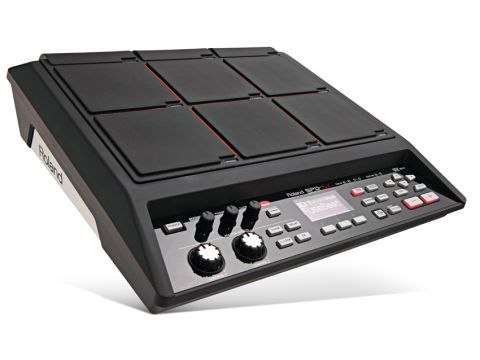 This is a must-have product which could make me run out of adjectives describing it - suffice to say the SPD-SX is as stunning as it is formidable!

Roland's spanking new SPD-SX is the replacement for the excellent SPD-S sampling pad, which has been with us now for around nine years.

The SPD-SX has nine playable pads with two dual input sockets, allowing up to four additional external pads, drum triggers or a combination of both. Due to its ease of use and user-routable sound outputs (headphone/main out or sub out), the SPD-SX is equally happy on stage and in the studio.

Having 2Gb of sampling memory available will give around two hours of stereo (six hours in mono) - it is feasible to sample a whole gigs' worth of music in CD quality.

Included with the pad is Roland's Wave Manager app for the PC (XP, Vista or Windows 7) and a copy of the pre-loaded samples on CD, 80-page manual (PDF version downloadable from Roland's website) and power supply.

The rectangular-shaped SPD-SX is constructed from ABS and finished in matt black with contrasting trims of brushed aluminium. Inset into the casing is a thick, durable rubber, covering 80 percent of the uppermost surface.

This is divided up into nine velocity-sensitive pads, consisting of six equal squares (taking up much of the playable surface) and three smaller pads (to be struck with stick shoulder) sited along the uppermost edge.

Sited below the playing area is a range of controls within easy reach of the performer. These include power, volume for master, phones (the SPD-S had this sited to the rear) click level, start/stop button for the click and the essential 'all sound off' button.

One of the most useful features for a live performance is the 'pad check' which mutes all sound apart from through the headphones.

A second or two after powering up (following a brief, animated 'SPD-SX' on the LCD display and a cool 'sweeping' display of the nine pad LEDs), the machine is ready to go.

The display shows the last selected kit and is large enough to provide a variety of useful information such as kit name/number, signal level, tempo, EFX1 and EFX2, and three selectable parameter buttons for 'padvol', kit FX and tempo.

Many of the functions such as tap tempo, kit increment/decrement, FX on/off etc, which would normally be performed by a foot switch, can also be assigned to any of the pads or additional triggers.

Once a sound is triggered, a dedicated LED (bottom right of each pad) illuminates with varying intensity, depending on the peaks of the waveform. This is extremely useful as a visual guide as to which of the pads are sounding.

Initially we begin striking each pad in turn, triggering one or more of the longer pre-loaded samples, pressing the 'filter' button and twiddling the 'control 1' knob, creating a whole new sound and rhythm - awesome.

Having had a great time with the supplied sounds and various effect features - it is a sampler after all - it's time to check out the various methods of capturing/creating samples.

This is performed by either the Wave Manager software (import or drag and drop facilities) or importing samples from a standard USB stick and sampling directly into the SPD-SX via the mic/line input.

Having imported a variety of samples using Wave Manager and the simple utilities of the SPD-SX itself, we find ourselves compelled to create some 'fresh' samples - we opt to sample our own snare, an empty bottle for a percussion sound and our own voice. For this task we are using our trusty old Shure SM58 plugged directly into the rear of the pad.

Sampling starts with a selection of menu options and an intuitive display guide - the only difficult part is choosing what to sample! After following the guide we manage some convincing samples with ease but decide to leave the snare and the bottle sounding 'dry' for now as these can be edited later.

However, after sampling our voice, we wanted to create something a little sinister so we lowered the pitch and applied plenty of reverb - scary!

Once a sample is created and stored in the SPD-SX, any of the onboard effects (for example, filtering) can be applied. Samples may be reversed, chopped, resampled, truncated, normalised and have the pitch altered - then it's just the task of saving the result as a new sample or overwriting the original.