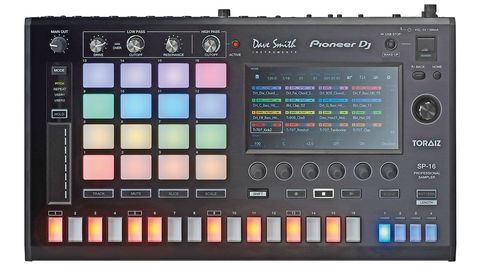 Some firmware refinement is needed to justify its price, but there's a lot to like about this inspiring and intuitive standalone sampler.

For some time now, there's been a bit of a gap in the market for a decent, fully- fledged standalone sampler.

With 16-channels, each capable of sampling up to 30 seconds, plus a step-sequencer, performance pads, touchscreen control and an analogue filter courtesy of Dave Smith, it looks tentatively like Pioneer's Toraiz SP-16 could be the standalone machine that old-school MPC fans have been dreaming of for the past few years.

The first thing you notice upon unboxing the SP-16 is that it looks like a bit of a Frankenstein's monster of other production gear - which is because that's sort of what it is.

The 16-step sequencer along the bottom of the unit is exactly the same as that found on Roland's TR-8 drum machine, the 4x4 pad grid owes an obvious debt to NI's Maschine, and it wouldn't take a great leap to imagine its touchscreen might be inspired by Akai's MPC Touch. Even the Dave Smith filter, although official, is simply lifted from the Prophet-6, complete with DSI-style knobs and branding.

That said, none of this is exactly a bad thing from a user's point of view - each is a winning element - and remarkably, despite this mixed pot of influences, the SP-16 still looks smart thanks to its sleek chassis and customisable backlit pads.

In use, the SP-16 has a very fast and fluid workflow. The combination of the velocity sensitive performance pads and step sequencer make it exceptionally easy to input, play, record and tweak sequences. Sample browsing, loading, recording and editing functions are mostly handled by the touchscreen and surrounding rotaries.

Mercifully, the SP-16 doesn't force you to use the touchscreen - it can be used whenever convenient, but more often than not parameters can also be controlled via the rotaries when a more precise touch is needed.

Generally the digital interface is very intuitive. Each channel has a corresponding module on the screen. Here you can load a sample from the internal 8GB memory or a connected USB drive, set up to record from the line-in or resample from your current project. These channel windows also offer sample/loop editing, an amp envelope (Attack/Hold/Release), an effect slot and a sequence edit window in which it's possible to nudge triggers off the grid, move the sequence around and set up beat-repeat style retriggers.

There is also a global mixer window, from which you get deeper control of track levels, including setting up an effect send and assigning individual track routings. Meanwhile, BMP/Quantize and a general settings windows allow the rest of the SP-16's global setting to be configured. Finally, there's an extensive arranger window in which Scenes can be sequenced to create full song arrangements.

There are number of smart workflow-enhancing features included on the SP-16. For one, the way the sequencer automatically duplicates 16-beat sequences when you extend them (up to the maximum 64 steps) is very handy. There's a solid Parameter Sequencing function too, which allows automation to be inputted to the step sequencer, although it's a shame this can't be automatically recorded in the style of Korg's Motion Sequencing.

The Slice beat slicer comes across from Pioneer's DJ gear, along with a Scale mode allowing samples to be played melodically using the pad grid. The quality of the built-in warping/timestretching isn't exactly pristine at extreme settings, but has a not-unpleasant old school charm. Finally, there's a touchstrip too, which can control a Pitch, trigger repeats, or be assigned via two User modes.

Then there's the DSI filter section. Here we get a LPF with cutoff, drive and resonance, accompanied by a one-knob HPF. It's the filter circuit from DSI's Prophet-6, so naturally it sounds fantastic; the drive is great for adding warm analogue crunch to the sound of the SP-16.

At first it might appear that having just a global analogue filter is a touch limited, but Pioneer has smartly applied it only to the master output (channels 1 and 2), with the remaining six analogue outputs bypassing it, making it easy to route certain sounds through the filter while leaving others clean.

Unfortunately, there are also a few problems with the SP-16. For one thing, the touchstrip doesn't function as it needs to. Currently, the Pitch and User modes seem to deactivate once a sound has been sequenced or recorded, which pretty much nullifies its ability to add variation during live performances.

Secondly, the built-in effects are fairly lacking. Each channel has one effect slot which can host a filter, 2-band EQ, chorus or flanger, which are okay, but a little unrefined. The Send effect options, meanwhile, are limited to just reverb and a pretty standard delay. Finally, I'd like to see some more Amp Env options - you really need an ADSR included for the flexibility a sampler like this needs. An assignable LFO would go a long way too.

It's worth noting that all these things could be fixed via firmware updates. Pioneer has a decent record in this department too. The SP-16 needs a bit of refinement to justify its top-end price, but there are still a lot of reasons to like it. The hardware itself is great, the general workflow is a lot of fun and it does a very good job of bridging the gap between the studio and live/DJ.