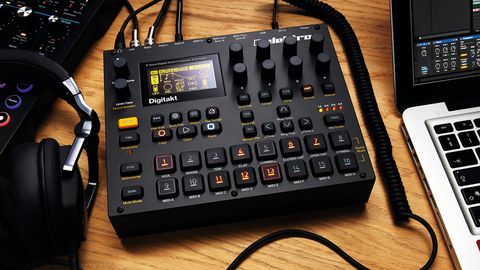 With deep sequencing and a powerful sound engine, Digitakt is the ‘affordable’ Elektron groovebox we’ve been dreaming of.

Despite having several quality synths to its name, along with last year’s Analog Heat and Drive effects, Swedish outfit Elektron is arguably best known for its cult drum machines and sequencer-driven grooveboxes. Its latest addition is Digitakt, a sampling drum machine and MIDI sequencer.

With a purely digital architecture, Digitakt is Elektron’s first nonanalogue offering since before the release of the Analog Keys in 2012.

It also comes in at a significantly more affordable price point than any of its existing grooveboxes, around £350 cheaper than the Octatrack and £500 cheaper than Analog Rytm.

Design wise, Digitakt is housed in a square chassis identical to that of the Analog Heat. Visually, it’s very much business as usual for Elektron - plenty of matt black with rubberized grey rotaries and a minimal helping of coloured LEDs. The OLED screen has a certain retro quality but is crisp and clear under all lighting conditions, and the various displays of the OS are generally clearly laid out.

Despite the price, the Digitakt hardware doesn’t feel much cheaper than that of the Analog Rytm. The most noticeable difference between the two machines is the lack of velocity-sensitive drum pads here.

Instead, triggering and sequencing the Digitakt is done with two rows of plastic buttons that bring to mind the click-y feel of a vintage computer keyboard, albeit sturdier.

The Digitakt feature 16 channels divided into eight audio - ie, sampling - channels and eight MIDI channels. Samples themselves can either be loaded via the internal memory or sampled from Digitakt’s audio inputs. The process of sampling is fast, fluid, and can be done without the need to pause the sequencer.

Opening the sampling window in Digitakt’s OS brings up options to set levels, arm recording and set an auto-record threshold. Once recorded, it only takes a few button presses to save, trim and rename a recording and then assign it to an audio track. Since Digitakt ‘holds’ a recorded audio clip until it’s manually cleared, it’s easy to slice multiple hits out of longer chunks of audio.

It’s worth noting that, despite stereo input jacks, Digitakt samples in mono, so recordings taken from both the L/R input at once will be summed to a single channel. Samples are saved to and loaded from the +Drive, which offers 1GB of internal storage. Digitakt also comes stocked with a healthy offering of quality factory sounds and kits.

Loading samples to the +Drive is handled via Elektron’s desktop sample transfer application. With no SD or USB input on the hardware, this means there’s no way to load sounds into Digitakt without a computer with the appropriate software installed, which is a bit of a shame.

Once onboard, however, Digitakt handles sounds in a smart, non-destructive manner, meaning that sounds assigned to patterns are copied, rather than directly edited, so the original remains available.

Saved recordings, or sounds already loaded into the internal memory, are assigned and manipulated in each track’s SCR menu. There are controls for setting a sample’s tuning, start and end points, along with play mode and loop settings. Playing with these can achieve anything from simple one-shots to more granular and texturally weird sounds.There’s bit rate reduction here too, which is great for beefing up thin sounds with a little lo-fi crunch.

Next, in the FLTR window, we get controls for filter type, cutoff and resonance, along with an ADSR envelope with depth control. The AMP window then offers a further AHD envelope shaper, along with level and pan controls. There are also send controls here for the global reverb and delay, along with an insert distortion. Each track also has its own LFO, which can be routed to a variety of filter, amp and sample manipulation parameters, with seven wave shapes on offer and the ability to run in a variety of sync’d, unsync’d and retriggered modes.

While ‘digital’ is often, unfairly, seen as synonymous with cheaper or less ‘full’ sounds, there’s certainly plenty of heft to Digitakt’s sound engine. The bit reduction and overdrive are particularly good at adding extra body and grit to sounds, and the sample manipulation and looping tools mean Digitakt can take things into esoteric territory well beyond simple one-shot sampling.

The global delay and reverb sound great too - each has its own edit window with the usual size, edit and width controls, making both solid tools for adding that finishing touch of atmosphere and space to patterns.

Around the back, Digitakt features a stereo pair of jack ins (although as mentioned, it samples in mono), a main stereo pair of jack outs and a single headphone output. There’s a trio of MIDI ports too - in, out and thru, the latter two of which double up as DIN sync ports. There’s a USB connector too, for connection to a host computer. As with previous Elektron instruments, Digitakt will shortly be able to take advantage of the company’s

Overbridge software, which offers tight DAW sync and audio interface capabilities. The difference this time, however, is that Elektron is implementing a two tier system for Overbridge. There’s a free version facilitating sample transfer, MIDI over USB, a librarian tool and limited audio streaming over USB, and a Premium version with full interface functionality, individual audio track outputs over USB and a VST-style interface. It’s a bit of a shame to see this functionality offered as a separate purchase this time. Bearing in mind what it unlocks, we’d be surprised if many users didn’t shell out the extra price - $69/79 euros - so it’s worth factoring that into the price consideration!

MIDI tracks, meanwhile, are used to output trigger and CC info to external instruments. The eight tracks can each output four notes of polyphony, which can be edited on a per-step basis, making Digitakt a fairly handy ‘hub’ for a sync’d hardware rig. For the MIDI track, the filter and amp windows can be configured to output CC data, and each track’s LFO can be routed externally too.

As with previous Elektron grooveboxes, the depth of the sequencer is the real trump card of Digitakt. While there’s too much to go into it fully within the space of a review, there are a few highlights worth touching on. For one thing, almost every parameter can be automated via Digitakt’s parameter lock capability.

This allows different values for anything within the parameter windows to be saved on a per-step basis. This can either be done in step-sequencing mode, by holding down the corresponding step, or recorded live. Digitakt also features a Conditional Locks mode, which allows changes to be dictated on a probability basis, which is great for injecting variety into patterns.

A Fill mode is a similarly useful tool for mixing up patterns, allowing the creation of temporary variations. The sequencer allows for pattern length to be set for each track, too, making it easy to create complex polyrhythms. There are also flexible global tempo, swing and time signature options. For deeper tweaks to the rhythmic feel of a pattern, micro-timing adjustments can be made on a per-step basis.

Retrigs can be applied to each step, creating quick ‘rolls’ of samples locked to adjustable beat divisions. Beyond the immediate realm of the sequencer and sounds, Digitakt has a flexible architecture for creating longer-form creations. The memory is divided into Projects, each of which can contain up to 128 patterns and 127 samples. Each pattern houses its own sounds, and multiple patterns can be chained together to create more complex projects.

While eight audio channels isn’t a huge number - compared to software driven beatmakers, at least - sample assignment can be automated for each step, along with all sound engine parameters, making it effectively possible to have multiple sounds triggered by a single audio track.

While this is all very flexible and capable, Digitakt isn’t necessarily the most intuitive sampler to use. This will likely not come as a surprise to seasoned users of Elektron gear - it tends to be the case that its instruments boast depth and functionality at the cost of simplicity and accessibility.

This isn’t necessarily a criticism; it’s not that Digitakt is badly designed - in fact, once you get your head around it, most design decisions seem remarkably sensible - just expect to spend a good few hours reading the manual before you can get the most out of it.

Broadly speaking though, there’s a lot to like about Digitakt, and despite a couple of minor gripes - the reliance on a computer for loading samples, the additional Overbridge cost - Digitakt lives up to the promise of offering Elektron’s deep sequencing functionality at a (comparatively) affordable price.

It might look like a humble sampler, but with great sequencing and a decent crop of connectivity, we can see this becoming the centrepiece of plenty of studio and live rigs. Not a box to underestimate!